Springsteen to play at the New Orleans Jazz Fest

Springsteen to play at the New Orleans Jazz Fest 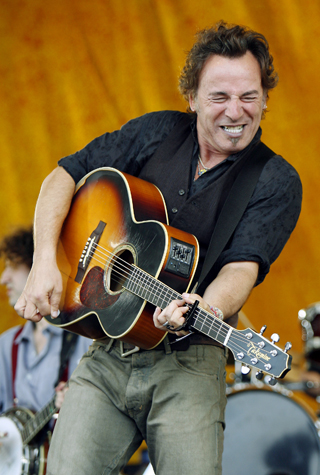 The last time Bruce Springsteen performed in New Orleans it was less than a year after Hurricane Katrina hit, and “The Boss” moved thousands to tears at Jazz Fest by belting out such lyrics as “How can a poor man stand such times as these?”

Springsteen is returning to the New Orleans Jazz and Heritage Festival this April. But this time, things will be different in a city that is healing from the devastating 2005 hurricane, according to Jazz Fest producer Quint Davis.

“The last time he walked on that stage, this was a city in ruins,” Davis said Tuesday, recalling an emotionally fragile audience with hands in the air and tears in their eyes as Springsteen sang the lyrics to “City in Ruins”.

Springsteen is the latest addition to a Jazz Fest lineup that already includes The Eagles, a reunion of the Beach Boys, Tom Petty and the Heartbreakers, Foo Fighters, Zac Brown Band, John Mayer, The Neville Brothers, Al Green, Herbie Hancock, Ne-Yo and My Morning Jacket.

In all, hundreds of acts are to perform on roughly a dozen stages during Jazz Fest, which spans two weekends from April 27 through May 6 at the city’s Fair Grounds Race Course. Roughly 85 percent of the lineup is from Louisiana, including New Orleans soul singer Irma Thomas, singer-pianist Allen Toussaint and jazz clarinetist Pete Fountain.

Springsteen and the E Street Band are scheduled to close out the festival’s first weekend on April 29.

He is expected to perform songs from his latest album, “Wrecking Ball,” due out March 6 on Columbia Records.

Springsteen already has released a single from the album, called “We Take Care of Our Own,” which gives a nod to New Orleans and its struggle to recover from Katrina.

“This is a very powerful song, and it’s done in full E Street-style, with that classic Bruce Springsteen power,” Davis said. “He’s talking about how people, when they’re not supported from the highest realms of power, have to help each other.”

“Wrecking Ball” is Springsteen’s 17th album and the first since the death of E Street Band saxophonist Clarence Clemons last year. Other songs on the 11-track album include “Death to My Hometown,” “This Depression” and “Easy Money.”

Davis said Springsteen represents one of the most important moments in the lives of residents in New Orleans because of his performance at the first Jazz Fest in 2006 after Katrina swamped much of the city with its floodwaters.

“He opened himself up, absorbed all the grief and the pain, and converted it into music,” Davis said.

Other additions to the Jazz Fest lineup announced Tuesday were Eddie Vedder and rapper Mystikal.

Vedder joined his Pearl Jam bandmates at the 2010 Jazz Fest in a performance that was broadcast directly to U.S. military forces in Iraq.