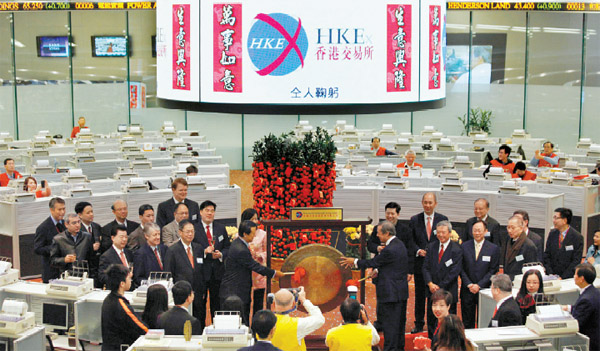 Chief executives at the Hong Kong Exchanges and Clearing (HKEx) hit a gong on the first trading day after the Lunar New Year holiday at the exchange’s headquarters yesterday. [REUTERS]

HONG KONG - Known as the world’s largest market for initial public offerings (IPOs), the Hong Kong Exchanges and Clearing (HKEx) promotes itself as a gateway to China, attracting businesses from around the world to go public there.

Last year, luxury fashion brands Prada and Samsonite decided to list in Hong Kong. However, no Korean company has listed on the exchange, despite the growing operations of Korean firms in Hong Kong and mainland China, and an increasing need for local financing.

One of the many reasons why there hasn’t been a Korean firm listed on the HKEx seems to be its stringent rules and regulations.

Lock & Lock, an exporter of household products, said last year it was reviewing a plan to launch an IPO on the HKEx for easier financing in China. But the company, which went public on Korea’s benchmark Kospi only two years ago, said it dropped the plan due to difficulties and regulatory hurdles.

Hyundai Securities’ Hong Kong branch also pledged to support SMEs bidding to make IPOs, but not much progress has been made since last year.

Major conglomerates like Samsung Group, Hyundai Motor Group and SK Group have not yet unveiled plans to go public in Hong Kong, either.

“We may have the toughest rules in the world,” said Lawrence Fok, chief marketing officer at HKEx. “We never try to attract companies to come and raise capital by lowering our requirements.”

He explained how rigid the threshold for the Hong Kong market is by giving the example of a well-known English football club.

“Manchester United tried to raise capital in Hong Kong. There were two different classes of capital,” he said. “Unlike in many other countries, in Hong Kong, you can have only one class of capital.”

He said the Hong Kong government introduced tougher regulations to the exchange after experiencing two big crises in 1973 and 1987. Oct. 19, 1987, served as an opportunity for Hong Kong to push for reform and tackle problems in the basic structure of the market after stocks dropped by 33 percent in a single day, Fok said.

According to a report by the Korean Securities Law Association (KSLA), the HKEx has tougher regulations than its Korean counterpart, the Korea Exchange (KRX).

“The HKEx deliberates on corporate governance,” said Kim Kab-lae, a research fellow at KSLA. “It requires an environmental, societal and governance (ESG) disclosure by companies, and provides an exemplary guideline for prospective IPO companies. Companies that do not meet the requirements mapped out by the guidelines must explain why they fall short of the requirements.

“Another difference when compared to the KRX is that outside executives of the HKEx actually participate in the deliberation process,” he said.

The HKEx has more rigid regulations than the KRX in that it scrutinizes the characteristics of companies by observing their governance in terms of corporate social responsibility, he added. This makes it harder for loan sharks, pornography producers and other companies of dubious morality to list on the exchange, even if they meet financial requirements.

Listing on the KRX is as tough as the HKEx in terms of what is required financially, Kim said. However, since the HKEx considers the sustainability and long-term health of IPO companies as a top priority, certain “invisible” standards must also be met.

After the Stock Exchange of Hong Kong and the Hong Kong Futures Exchange were merged in March 2000, the HKEx has risen to become the world’s No.1 listed exchange with the largest market capitalization, according to statistics from the World Federation of Exchanges as of December 2011. It also has the largest turnover in terms of securitized derivatives.

The HKEx has also ranked first in terms of IPO funds raised for the last three years. In 2011, around $33.24 billion was raised through a total of 101 IPOs in Hong Kong, according to the exchange.

When asked how Hong Kong had become a major IPO market, Fok said that its ties to the mainland, with its growing clout, were just one reason. “People can [also] raise capital in Hong Kong at a very good price,” he said.

The Hong Kong stock market also outstrips its Korean rival in terms of price competitiveness, according to industry insiders. Several Chinese companies that have listed in Korea are apparently now turning their attention to Hong Kong. The price earnings ratio (PER) of Hong Kong’s Hang Seng Index is reportedly 20 percent higher than that of the Kospi 200. This means that the PER figures of Chinese companies on the Korean market are four to six times lower than those operating in Hong Kong.