Franchises give mom-and-pop bakeries the blues

Franchises give mom-and-pop bakeries the blues 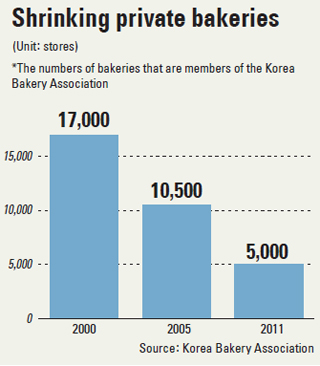 Although it often seems like there is a bakery on every street corner in Seoul, it is increasingly difficult to find mom-and-pop bakeries as large franchises crowd the market.

In the last few years, bakeries run by individuals have given way to fancy franchises such as Paris Baguette and Tour les Jours, both of which are operated by conglomerates.

Many mom-and-pop operations have already closed their doors due to the stifling competition. Other have signed up to become franchises.

According to the Korea Federation of Small and Medium Business, the number of bakeries run by individuals plunged from 17,000 in 2003 to 3,000 last year, meaning that 70 percent of them disappeared in just eight years.

In contrast, Paris Baguette, the country’s biggest bakery franchise run by SPC Group, saw its numbers swell to 3,010 last year, with over 300 outlets opening in 2011 alone. On average, 120 stores have been launched every year since the first Paris Baguette was established in 1988.

Tour les Jours, another franchise, run by CJ Foodville, an affiliate of CJ Group, also saw its numbers jump to 1,407 last year, 14 years after it opened its first store. While many opened on major streets, they have also become increasingly popular in smaller neighborhoods and residential areas.

A bakery owner in eastern Seoul said he does not hold out much hope for the future. “We’re no match for the big franchises” lamented Lim Nok-gyu, who owns Miho Bakery in Dongdaemun District. “It is becoming harder and harder to survive.”

“These days, people prefer a well-known brand when they make a purchase and bakeries are no exception. They don’t like mom-and-pop stores anymore,” he said.

Lim said he has tried to compete on price, but that there are limits. “Recently, the cost of raw materials like wheat flour increased 20 percent. We can’t lower our prices any further,” he said. “The big stores don’t even view us as competition anymore.”

Lim said he has heard of other independent bakery owners receiving offers from large franchises to come on board, but he has never received such an invitation.

Another reason for the growth of franchises is that many retirees, especially baby boomers with their life savings to invest, are choosing to open franchise bakeries as they present less risk than pursuing their own start-up.

“Franchises are easier to run because all they have to do is bake the dough that has already been prepared,” said an official with the Korea Bakery Association.

To make matters worse, the heiresses of the country’s leading conglomerates have recently taken a shine to the bakery business and opened up shops at department stores owned by their families. Many have been criticized for making easy money as they are coddled in safe business environments that have a high chance of success, in contrast to the innovation and global aspirations shown by their forefathers.

Chung Yoo-kyung, the vice president of Shinsegae Department Store, personally owns 40 percent of Shinsegae SVN, which has bakeries at a number of the former’s department stores and E-Mart discount chains, all of which are owned by Shinsegae. Chung is the only daughter of Shinsegae Chairwoman Lee Myung-hee.

The bakery has two franchise chains under its wing: Dalloyau, which has 10 stores at Shinsegae stores, and Vecchia & Nuovo, which has six stores in uptown areas such as Cheongdam-dong in southern Seoul.