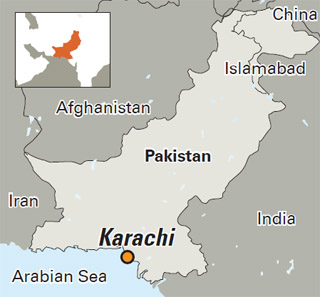 Ssangyong Engineering and Construction has won a deal to rebuild part of the Port of Karachi in Pakistan for $92.8 million, the company said yesterday.

The Karachi Port Trust contracted out the project, which will be financed by loans from the World Bank. Ssangyong will receive 15 percent of the total construction proceeds in advance, which the company described as very favorable terms.

The current deal is to rebuild four wharves of the country’s biggest port, a program Ssangyong said will take 30 months to complete.

The company has been reconstructing five other wharves at the port, and these are expected to be completed by April. The work began in 2007 and is valued at $90 million.

“Our bid price was not the lowest, but the Karachi Port Trust acknowledged our skill in building the five ports there,” said a Ssangyong employee.

Karachi is located on the southern coast of Pakistan and has a population of 13 million people. The port can process 1.17 million TEUs, or 20-foot equivalent units, of containers a year.

Pakistan has been carrying out numerous infrastructure-related projects recently, and is considered a lucrative market for construction firms.

Ssangyong is involved in various projects in South Asia and is building a 180-kilometer (111.8-mile) highway in India.