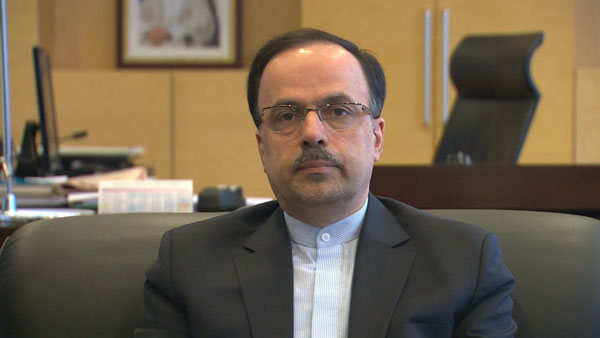 Korea will lose its footing in the entire Iranian market should it follow the U.S. request to reduce importing oil from the Islamic republic over its nuclear program, the ambassador of the Middle East country to Seoul warned yesterday.

“We can find our own customers and if Korea joins this sanction, Korea will be deprived of Iran’s market,” Ambassador Ahmad Masumifar said in an interview with the JoongAng Ilbo and JTBC.

Seoul is being pressed by the United States to join the allied efforts to reduce imports of oil as part of tougher sanctions over Iran’s suspicious nuclear program, based on a U.S. Congress-initiated law.

Under the law, the U.S. will punish foreign financial institutions doing business with the Central Bank of Iran.

The law provides an exemption from such restriction to a country only when it limits its oil imports from Iran at a substantive level.

That puts Korea in a tight spot, which heavily depends on its oil imports from Iran.

Korea imported $9.3 billion worth of Iranian crude oil for the whole year of 2011, or 9.26 percent of $100.8 billion worth of crude oil it imported from around the world last year, according to the Korea International Trade Association yesterday. In 2010, it was 8.3 percent.

Seoul has talked with other oil producers in the Middle East, including Oman and the UAE, to make up for a possible Iranian oil reduction.

But the Iranian ambassador claimed that Korea will have difficulty in quickly finding an alternative source of crude oil because the Korean oil refinery system is invested in Iranian oil.

Oil aside, Iran is a major Middle East partner for Korea.

The bilateral trade last year amounted to $18.5 billion, up about 60 percent from 11.5 billion a year earlier.

Korea exported $7.19 billion worth of industrial goods including cars, steel and home electronic appliances to Iran.

“We believe that this is not what Korean people and Iranian people are looking for,” the ambassador said.

“The [Korean] government should pay attention to what the people are wanting and saying.”

The ambassador claimed that the new U.S. sanction on Iran, currently supported by the European Union and Japan, will prove to be a sanction on themselves, citing an International Monetary Fund report released on Wednesday.

The IMF report warned that global crude oil prices would rise up to 30 percent as a result of Iran’s decreased oil exports under the new international sanctions.