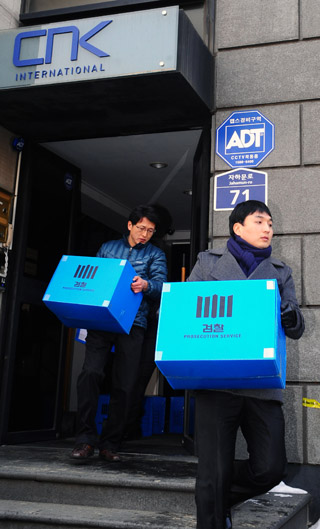 Korean authorities demanded the dismissal of a senior diplomat and a prosecution investigation into his role in promoting a diamond mine in Cameroon, a scandal that involves several high-ranking public figures.

The Board of Audit and Inspection said Kim Eun-seok, Korea’s resource ambassador, should take responsibility for misusing his authority in intentionally promoting a particular company so people could profit from trading its shares with inside information.

Kim led the drafting of a press release issued Dec. 17, 2010, by the Ministry of Foreign Affairs and Trade that said 420 million carats of diamonds, or 2.5 times the global annual diamond production, were estimated to be buried in Cameroon mines that would be developed by local developer CNK International.

In the press release, the ambassador described it as an exemplary case of “resource diplomacy,” which the government was actively promoting at the time.

CNK’s stock value skyrocketed after the press release. Various people connected with the company, the government or public organizations allegedly purchased shares before the release.

The Board of Audit and Inspection said it will provide detailed investigation results about the involvement of two other high-ranking figures and the head of the company to the prosecution.

“We are being stern on people who caused public distrust by performing the government’s assistance inappropriately,” said an official of the BAI.

The BAI said that Kim was aware the information in the release was exaggerated after he was briefed twice by Oh Deok-gyun, CNK’s chairman, in December 2008 and January 2009.

CNK research in 2009 concluded that only 5.8 percent of the diamond reserves mentioned in the press release were in the mine. Kim knew the results of the research immediately, the BAI said.

Two younger brothers of the ambassador purchased the shares in bulk beforehand, the BAI said.

The BAI said Kim shoulders even heavier responsibility for issuing another press release from the Foreign Ministry on June 28, 2011, saying the data in the original release was credible. The second press release was in response to an article by the Korea Economic Daily that said the ministry had hastily issued the first release. The company’s stock price surged from 7,400 won on June 27, 2011, to 18,500 won to Aug. 19, 2011.

The BAI said it also found three other government or public company officials benefitted from trading the stock or having their relatives do it. They included Kim’s secretary at the Foreign Ministry, a director at the Prime Minister’s Office and an official of the state-funded Korea Resources Corporation. The three should be punished, the BAI said.