On welfare, it’s a poor idea to try to find work

On welfare, it’s a poor idea to try to find work 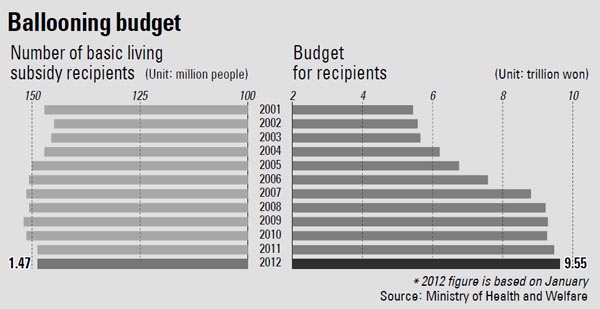 Kim, 52, is one of Korea’s deserving poor. Kim is partially blind so he can’t work. He receives the government’s basic living subsidy, the bedrock of the Korean welfare system, of 960,000 won ($855) a month.

Last February, Kim’s 22-year-old son landed a job as a laborer at Kia Motors that paid 2.1 million won a month. The family hadn’t been so cash-rich in a long time. 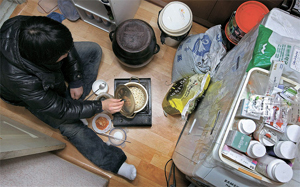 But Kim told his son to quit. His monthly salary was pushing the family’s joint income above the minimum living cost for a family of four, which is 1.49 million won a month. As a result, Kim was about to lose his basic living subsidy payment. His son complied, and the family is now back to living on welfare.

Turning down a 2.1 million won salary to maintain 960,000 a month in welfare payments sounds like extremely bad arithmetic. The basic living subsidy isn’t cash alone. In Korea’s “all or nothing” welfare system, Kim was also eligible for 50 more benefits from the government, including nearly free medical care and a 50 percent discount on mobile phone bills.

And that system, critics say, is keeping people on welfare from even trying to find work or pull themselves out of poverty.

“Once welfare recipients lose their entitlement, they immediately get eliminated from receiving all other benefits, including free garbage bags,” said Park Yong-geum, a social worker at the West District Office of Gwangju. “Who would make efforts to earn a living when receiving welfare benefits is better?”

Currently, 1.47 million people from 880,000 households receive the basic living subsidy, which will cost the government an estimated 9.55 trillion won this year. The number of recipients has stayed in the same range for the past decade, but the budget spent has more than doubled as the amount doled out rises. The average monthly payment is 790,000 won per recipient; it varies depending on the size of the family. About 234,000 households have been on the welfare rolls for more than a decade.

In August, the government cracked down on welfare recipients who had unreported spouses or adult children who made enough to support them. Some 33,000 people were declared cheaters and had their payments cut off. The most egregious case was an elderly man from Busan who had fraudulently claimed benefits for two decades by pretending he had no children. His son was belatedly found to work at a public enterprise and be to running a small business with his wife, netting the couple an aggregate monthly income of 14 million won.

The crackdown scared many recipients into making sure their households remained poor. Jang, 61, has been getting the basic living subsidy for the past eight years. Her husband landed a job through a government self-reliance program that pays between 500,000 and 700,000 won a month, well below the 1.49 million limit.

But Jang got a shock last June when her 22-year-old daughter, who lives with the couple, landed a job earning 1.4 million won a month. That will push them over the limit, and Jang won’t get dirt cheap medical care, which she needs after undergoing thyroid cancer surgery 10 years ago and for arthritis, atopic dermatitis and osteoporosis.

“A majority of subsidy recipients make their children move out,” an official from the welfare department of Gangseo District Office in western Seoul said, “and continue to receive the entitlement.” However, Jang said she has no money to pay for her daughter’s rent outside the home.

“I’m worried because my daughter’s income will not be able to cover my medical expenses,” Jang said.

A college student surnamed Song, 21, has a mother who can’t work due to a bad back. Song’s family gets a welfare payment of 960,000 won a month. But Song also works at convenience stores on the weekends to pay for her own food and transportation. Recently, she received a notification from the district office that her family will lose 480,000 won in monthly basic living subsidy due to her part-time work.

“I must work in order to at least pay for my own living expenses,” Song said.

After fierce criticism from college students whose jobs threaten their parents welfare payments, the Ministry of Health and Welfare came up with a temporary measure of deductions on income declared. For the elderly and disabled, only 30 percent of the household’s actual income is counted. But this is only a temporary measure.

“The system has a side effect that makes children of subsidy recipients lose the drive to work,” said Kwon Byeong-gi, an official from the Welfare Ministry. “We will make efforts to come up with better measures to find a balance.”