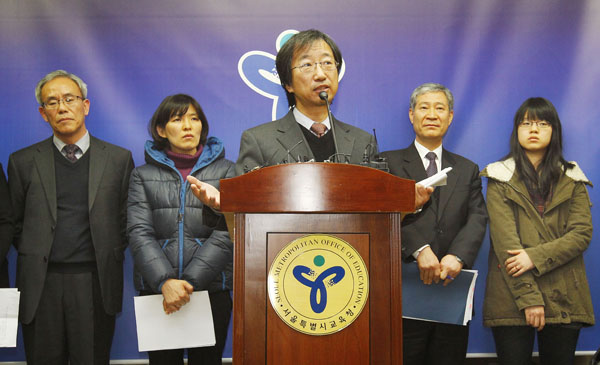 Han Sang-hui, a senior official at Seoul Metropolitan Office of Education, responds to questions from reporters at a press conference yesterday after the city education office proclaimed an ordinance to protect students’ rights, which bans any kind of corporal punishment. [YONHAP]


Seoul Education Superintendent Kwak No-hyun proclaimed the controversial students’ human rights ordinance that bans any kind of corporal punishment, continuing his clash with the central government and many parents and teachers nationwide.

The liberal superintendent, who was fined for election bribery and released from four months in custody last week, implemented the ordinance yesterday. It took effect immediately in all elementary, middle and high schools in Seoul.

“The human rights of students are basic rights that must be guaranteed to maintain dignity as human beings and pursue happiness,” the ordinance says.

It prohibits discrimination against students based on gender, religion, age, race, whether they are pregnant or because of their sexual identity.

The ordinance allows students to stage rallies in certain areas and loosens dress and hair codes in schools. Religion classes must be optional.

The most controversial part of the ordinance is the banning of corporal and verbal punishments, which many parents and teachers say will lessen teachers’ authority and lead to students getting out of control.

“Starting from this upcoming spring semester in March, the ordinance will be implemented,” Kim Hong-seop, a senior official at the Seoul Metropolitan Office of Education, told reporters yesterday.

Kim said that the education office will devise an ordinance to protect teachers’ rights as well in response to rising student misbehavior, including physical assaults on teachers.

“Along with the Seoul Metropolitan Council, we will carry forward with an ordinance for teachers as well,” Kim said. “We can’t pinpoint the exact day of enacting the ordinance. But we will arrange a string of programs to help teachers do their jobs well [through the ordinance].”

The Ministry of Education, Science and Technology yesterday filed a lawsuit with the Supreme Court challenging the ordinance and applied for an injunction to suspend its implementation in advance of a court ruling.

The ministry has consistently opposed the ordinance passed by the Seoul Metropolitan Council last December, saying it could infringe on the human rights of teachers and students and that there’s no public consensus on the issue.

When Kwak returned to his office this week, Education Minister Lee Ju-ho demanded he ask the city council to reconsider the ordinance. Kwak refused.

The ordinance was one of his main campaign pledges when he ran for the position in June 2010.

If the Supreme Court allows the injunction, the ordinance will be suspended. The court said it will decide about the injunction in mid-February.

The conservative Korean Federation of Teachers’ Associations yesterday said it will hold rallies against the ordinance near local schools.