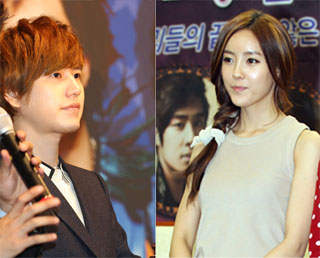 Super Junior’s Kyuhun and T-ara’s Hyo Min are slated to star in a pilot of the Chinese version of the popular reality show “We Got Married.”

MBC announced yesterday that the pilot will air as a two-part Valentine’s Day special in China on Feb. 13 to 14 through a new channel on the SMG network, which is co-producing the show with the Korean network.

The show will feature three couples. Two of the couples will be multiracial, with one Korean and one Chinese spouse.

Kyuhyun will be “married” to Chinese actress Lou Yixiao while Hyo Min will be paired up with Chinese boy band member and actor Fu Xinbo. The remaining couple will be a pair of Chinese actors. Kyuhyun and Lou will honeymoon in China while Hyo Min and Fu will come to Korea for their honeymoon.

The decision to create a full version of the program will be made after reviewing the show’s ratings in China. The Chinese version will also be shown in Korea, but the air date is yet to be confirmed. By Carla Sunwoo