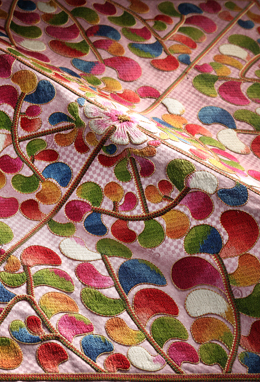 In a world where mass-produced plastic bags and stackable storage containers are the norm, the traditional arts of bojagi and storage chests are no longer essential. Yet growing interest in these Korean craftworks has elevated them to art, and now, two new exhibitions in Seoul will highlight the elegant qualities of both.

Lotte Gallery will feature an exhibition on bojagi, a wrapping cloth that was often elaborately embroidered, and Shinsegae Gallery will showcase delicate jewelry boxes and chests from Joseon Dynasty Korea.


A stitch of art

Bojagi is a composite art that integrates the maker’s devotion, labor, beauty, laughter (and sometimes sorrow or resentment) into a single square cloth.

As an integral part of the everyday lives of all Korean social classes for centuries, the bojagi rarely warranted special notice.

But the colorful cloth that was once used to wrap, store and carry items is now attracting attention as Korea’s leading traditional craftwork.

Behind the recent interest in bojagi is leading artist Kim Hyun-hee, who has dedicated her life to interpreting the works of her ancestors into modern works that echo and, in some ways, transcend the originals. 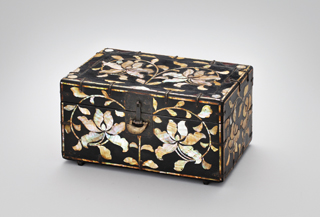 Kim, 66, who has been making embroidered bojagi for 26 years, is currently showcasing her work at Lotte Gallery in central Seoul through Jan. 29. On display are some 50 pieces ranging from her early, more traditional pieces to recent modern works, all of which display intricate embroidery and elegant designs.

It was at age 19 when Kim began studying embroidery with Yoon Jeong-sik, 100, who learned the traditional skill from a court lady during the Joseon Dynasty (1392-1897).

In the early years of her career, Kim primarily made embroidered clothes, quilts, fabric pouches and pillows. Since 1986, she has been focused on bojagi. 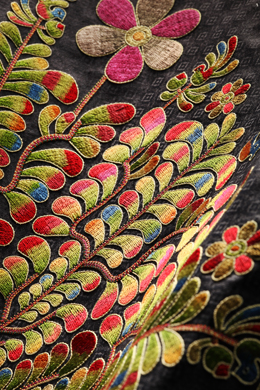 “I chose bojagi because people around the world, including the Japanese and French, seem to really like it,” Kim said during a meeting with reporters earlier this month. As a young artist, Kim worked tirelessly in service of her art.

“When I was young, I worked 16 hours a day, splitting my sleep into several short periods,” she recalled.

As a result, she experienced a great deal of pain. She was unable to move her stiffened right arm and neck.

She was rewarded for her labor when she was designated a master of arts and crafts by the government in 1997.

These days, she is interested in patchwork bojagi, which requires the maker to stitch together hundreds of pieces of fabric of various shapes, sizes and colors. She dyes her own fabrics using natural dyes. 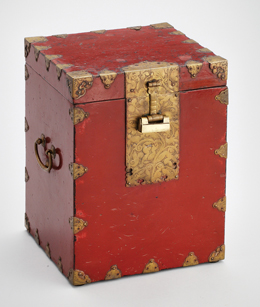 Kim’s works are more widely known in other countries including Japan, the United States, Canada and Switzerland than at home in Korea.

Since 1995, she has had several exhibitions in Japan. She also published her first book of photos of her bojagi in Japan, not Korea, in 1999. The book has since sold more than 10,000 copies. Photographs of her bojagi were also printed on the cover of a home economics textbook used at high schools in Japan. 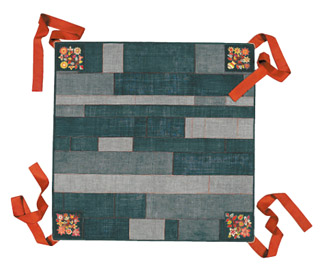 In addition, the National Folk Museum of Korea has 29 of her pieces in its collection, the Seattle Art Museum has four, and a museum at Harvard University and a folk museum in Vienna each own one.

“I have created these pieces with this feeling of responsibility to increase the world’s awareness of traditional Korean culture,” Kim said. “I want foreigners to have an interest, but I also hope my work will encourage Koreans to have more interest in their own culture.”

Lotte Gallery, which displays Kim’s works, is closed on Sunday, but works by 15 of Kim’s students will be displayed at Avenuel next door until Feb. 29. For more information about the exhibit, call (02) 726-4428~9. Lotte Gallery is located at Lotte Department Store in Sogong-dong, central Seoul. Admission is free.

Chests that were produced and used during the Joseon Dynasty are on display at Shinsegae Gallery in Chungmuro, Jung District, central Seoul. The exhibition consists of three sections and displays more than 50 works. The first section is a collection of minimalistic boxes that were used by seonbi (Joseon-era scholars) and the second introduces boxes that were used in everyday life to store books, important documents, clothes and jewels. The third section provides a glimpse of luxurious boxes that were symbols of wealth and used by upper-class women.

“The striking characteristic of the furniture of the Joseon Dynasty is simplicity, which served to highlight the true nature of the main material - wood,” said curator Yeom Hye-jo.

Yeom added that another characteristic of these boxes is that they are all quadrilateral. “In Asian culture, an oval shape represents heaven and a quadrilateral symbolizes earth,” she said.

These boxes, called ham in Korean, are mostly made of wood but are often decorated with special materials such as shark skin and bamboo.

“During the Joseon Dynasty, the boxes were used by everyone but this exhibition focuses on the ones that were used by the upper class,” said Yeom.

The exhibition will also display other small crafts such as wooden pencil cases, food containers and wooden pillows. The artworks are drawn from the collections of Leeum, Samsung Museum of Art, and the Kyungwoon Museum.
The exhibition runs through Feb. 1 and admission is free. For more information, call (02) 310-1924.