Samsung Electronics, the world’s No. 1 maker of flatscreen TVs and computer memory chips, logged record sales and operating profit in the fourth quarter, the company said in a regulatory filing yesterday.

Samsung fell behind Apple in the smartphone war in the fourth quarter, after dethroning its U.S. rival in the third. Analysts expect neck-and-neck competition in the lucrative business throughout 2012.

Still, Samsung had a banner year in 2011 on the sales side, posting record sales of 165 trillion won for the year. Its previous sales record was in 2010 with 154.63 trillion won.

Operating profit for the year was 16.25 trillion, down 6.05 percent from a year earlier. 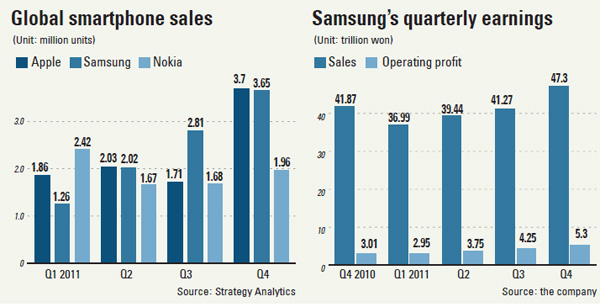 In 2010, the biggest contributor to the company’s sales were semiconductors. But in 2011, that role was played by the mobile communications products.

Looking at Samsung’s sales for the whole of last year by business areas, its digital media and appliance unit - which sells TVs as well as home appliances - contributed the most, posting 58.92 trillion won. That was followed by mobile communications (55.53 trillion won), semiconductors (36.99 trillion won) and displays (29.24 trillion won).

The figure for mobile communications was up 39 percent from a year earlier - plus it broke the 50 trillion won mark for the first time - while the revenues from semiconductors and displays were slightly down to due persistently low costs.

A look at Samsung’s operating profits for last year by business area also proves that mobile was the biggest star.

Of the 16.25 trillion won operating profit, 8.27 trillion won - or about half - came about from the mobile communications unit, which sells the Galaxy S smartphones and the Galaxy Tab tablet computers.

“The profitability of Samsung’s smartphone business improved far more than market expectations and is stable,” said Kim Seong-in, an IT analyst at Kiwoom Securities.

“The brisk business of its smartphones and home appliances offset the continuing losses of the semiconductor and LCD businesses,” said Park Kang-ho, a technology analyst at Daishin Securities.

Not all news was good yesterday.

A Strategy Analytics report said Samsung sold 500,000 fewer smartphones than Apple in the September-to-December period, usually a boom time for electronics companies because of the holiday season.

That was a stark contrast to what happened the previous quarter.

Samsung sold 2.81 million smartphones, compared to Apple’s 1.71 million, in the third quarter, rising as the new star in the smartphone business. That quarter, Apple’s legendary founder Steve Jobs passed away.

But on an annual basis, Samsung sold more smartphones than Apple in 2011.

Things are looking good for this year, according to analysts.

Samsung Group, Korea’s largest business conglomerate whose flagship company is Samsung Electronics, announced earlier this month that it will invest 47.8 trillion won this year despite economic uncertainties at home and abroad.

The amount is a record in the group’s 73-year history and an increase of 12 percent from last year.