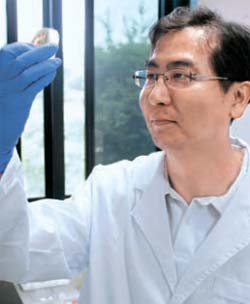 Oh Dong-chan, professor of pharmaceutical manufacturing at Seoul National University, checks a flask containing microorganisms last August in a lab at SNU’s College of Pharmacy. Provided by the professor

Oh Dong-chan, a professor of pharmaceutical manufacturing at Seoul National University, was in a lab at SNU’s College of Pharmacy last Wednesday surrounded by flasks of microorganisms, the latest batch of which he had collected in the salt evaporation ponds of Shinan, South Jeolla, last November.

“Aren’t they beautiful?” he asked, inviting this reporter to take a look through the microscope, under which anonymous microbes were happily wriggling away. “I’m happy to forego sleep if it means I can do research.”

Oh’s love of research was recognized earlier this month, when he became the first Korean to be chosen for the Howard Hughes Medical Institute’s International Early Career Scientist Program, a prestigious grant that even Nobel Prize contenders vie for.

Howard Hughes Medical Institute, a nonprofit research organization with a flagship program in biomedical research, was founded by aviation magnate and film producer Howard Hughes in 1953 and went on to produce 13 Nobel Prize winners. Oh was one of 28 scientists chosen out of 760 applicants for the program and is expected to receive $715,000 over the next five years to fund his research.

Oh did not start out in pharmaceutical research, but received his bachelor’s and master’s degrees in oceanography at SNU. In 2006, he received his doctorate from the world-renowned Scripps Institution of Oceanography at the University of California, San Diego, for researching marine bacteria that produces antibiotic compounds for human drugs. After a stint working as a researcher at Harvard Medical School, he joined the faculty at SNU’s College of Pharmacy in 2009.

“Majoring in oceanography helped me to gain new insight into the pharmaceutical field,” Oh said. Unlike other pharmaceutical researchers, he made his breakthroughs by studying microorganisms found in salt evaporation ponds or on the ocean floor.

He was also lucky to have had a series of outstanding mentors. At Scripps, Oh worked under William Fenical, a pioneer in the field of marine natural products, while at the Department of Chemistry and Chemical Biology at Harvard Medical School he worked with Jon Clardy, a leading researcher in the field of biologically active small molecules found in relation to insects.

“I worked with the best people, blazing trails in new fields,” he said.

Nowadays, the focus of Oh’s research is microorganisms that live in symbiosis with insects.

“We are in the process of producing an antibiotic that stops organ transplant rejection by researching antibacterial matter such as antifungal agents,” he said. “As more [bacteria] have built up a tolerance for existing antibiotics such as penicillin, finding a new antibiotic compound has become the new task for academic researchers.”

He also voiced his support of, and thanks to, his sponsors.

“A scientist’s imagination and creativity can be triggered if grants are given with respect to the scientist’s potential, as is done by the Howard Hughes Medical Institute,” he said.