Investigator in hot water after text to president

Investigator in hot water after text to president 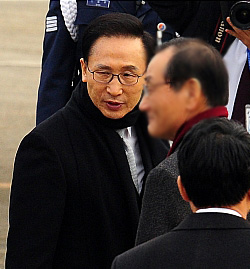 On the first day of the Lunar New Year holiday, President Lee Myung-bak texted a greeting to Korean police officials nationwide that read, “I know that most police officers work although it is the country’s biggest holiday. I always appreciate your devotion in serving the nation.”

However, one police official surnamed Yang, the chief investigator in Jinhae Police Precinct in South Gyeongsang, didn’t appreciate the president’s message because of the new jurisdiction for criminal investigation that has extended prosecutors’ power over investigations. Yang then replied to President Lee, which read “President Lee, you have no sense of shame. How could you send a text message like this to police? You’ve changed this country from ‘prosecution republic’ to ‘prosecution empire.’ I will judge this government as a voter.”

Cho Hyun-oh, commissioner of the National Police Agency, was outraged after being informed about Yang’s message and admonished the police officer through the agency’s intranet bulletin board. Cho posted a message which read “It’s something that a police officer isn’t suppose to do. I can’t believe that an incumbent officer sent a message that is filled with inappropriate content.”

The police transferred Yang to a local station to censure him for his misconduct. “I sincerely accept the transfer,” Yang said. “I admit that there was some inappropriate content.”

Yang was one of the core members who led the handcuffs protest in November. About 100 police officers planned to send handcuffs to the Prime Minister’s Office in a symbolic gesture to protest the revised jurisdiction.