KBL’s best put on a show at All-Star Game

KBL’s best put on a show at All-Star Game 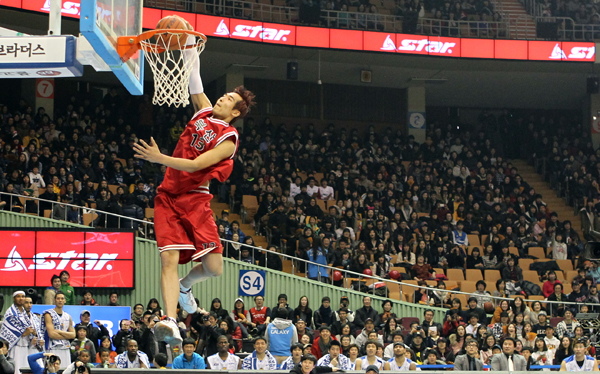 
Changwon LG Sakers forward Moon Tae-young was named the most valuable player at the Korea Basketball League All-Star Game yesterday, taking the top honor for the first time since his 2009 KBL debut.

With some 9,000 fans gathered at Jamsil Gymnasium in Seoul, the 34-year-old Moon, who was granted Korean citizenship last year with his brother Moon Tae-jong, put up 24 points with 10 rebounds and four assists, playing a pivotal role in the Dream’s 143-119 victory over the Magic. It was the largest win in KBL All-Star Game history.

Moon, who was the league’s top scorer in the 2009-10 season, received 23 of 63 votes from KBL-registered reporters to win the individual title. It was the third time naturalized Koreans have won the MVP award at the KBL All-Star Game after brothers Lee Dong-joon and Lee Seung-joon did so in 2009 and 2010.

Ulsan Mobis Phoebus guard Yang Dong-geun, who received the most votes to play in the All-Star Game, scored 25 points including seven 3-pointers, and Wonju Dongbu Promy center Rod Benson had 24 points and 15 rebounds for the Dream. Seoul Samsung Thunders’ forward Lee Seung-joon had a game-high 27 points including 10 slam-dunks.

As usual, the All-Star Game wasn’t seriously competitive from the beginning, with players’ busy showing off their skills to entertain fans.

In fact, the game seemed like it was over in the first half, with the Dream heading into the locker room with a 71-48 lead at halftime. It was the highest score margin in the first half in the history of the KBL All-Star Game. The previous record was a 21-point differential in 1999.

But there were plenty of special events to cheer up the crowd, including a special one-on-one tournament, the skills challenge and the dunk and 3-point contests.

The one-on-one tournament, which was held for the first time, featured two top contenders for rookie of the year, Oh Se-keun of Anyang KGC and Kim Sun-hyung of Seoul SK Knights, both former Chung-Ang University teammates. The two went head-to-head in the finals and Oh came out on top.

Kim also attempted to claim the crown at the dunk contest, but Kim Hyun-min of the Busan KT Sonicboom - who emulated the main character of Japanese sports comic “Slam Dunk” and showed hilarious celebrations with dances and costumes - took the title.

“I was thinking about the idea more than two weeks ago,” said the 24-year-old forward Kim. “Even in other practices, I just don’t want to lose dunk shots to anyone. I will try my best to play in the main event next year.”

The Sonicboom almost swept the special events yesterday. Charles Rhodes, who is expected to leave the KBL in a few weeks after the team filed for a foreign player replacement for Jarrid Famous, won the dunk contest among foreign players, while guard Park Chan-hee took the skills challenge title. The skills challenge involves shooting, dribbling past obstacles and passing the ball into nets in the fastest time.