Park’s goal not enough as United falls to Liverpool

Park’s goal not enough as United falls to Liverpool 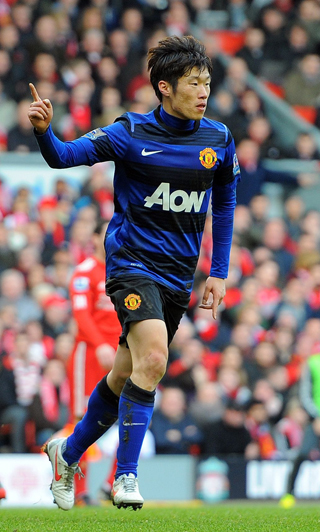 Manchester United midfielder Park Ji-sung scored his third goal of the season, but couldn’t save his team from a 2-1 defeat against Liverpool in the fourth round of the FA Cup on Saturday.

At Anfield Stadium in Liverpool, when United was trailing 1-0, Park struck the equalizer in the 39th minute as he drilled Brazilian defender Rafael’s cross into the net, but had to see his team’s early exit in the FA Cup.

“We controlled the ball, which is what we wanted before the game,” Park told MUTV.

“We did that well, but that couldn’t get the win for us.”

It was Park’s third goal of the season and first goal in 2012. His last goal was against Wigan Athletic on Dec. 27 in league competition.

Since Park joined the team in 2005, United had never lost a match when the Korean scored - the Red Devils marked 25 wins and one draw. But the record was broken on Saturday as substitute Dirk Kuyt struck two minutes from time to give hosts Liverpool a 2-1 victory,

Kenny Dalglish’s side, still missing the verve offered by Suarez, took the lead on 21 minutes when Daniel Agger headed in a corner that struggling United goalkeeper David de Gea failed to collect after he was crowded out by the hosts.

United, without the injured Wayne Rooney, hit back through a crisp strike inside the near post from Park on 39 minutes, and the visitors had other good chances, with Antonio Valencia hitting the post.

Liverpool had the last laugh, though, when Andy Carroll, widely criticized for his form since his move from Newcastle last year, flicked on the ball to leave Evra out of position and Kuyt slammed it in when de Gea could again have done better.

Asked if Liverpool had merited victory, captain Steven Gerrard told ITV Sport: “Not on possession, probably not on general play; we’ve got to give Manchester United credit, they controlled large periods of the game today, but the most important thing was the result, and we got there in the end.”

United boss Sir Alex Ferguson, whose side beat Premier League title rivals Manchester City in the third round but are now out of the FA Cup as well as the Champions League, agreed.

“I don’t know how we lost it - it was a really good performance by us,” he said.

In other FA Cup matches, Mike Williamson was the fall guy for Newcastle United as his 76th-minute own goal meant Brighton & Hove Albion FC of the second division knocked out the Premier League side 1-0 in the late kickoff.