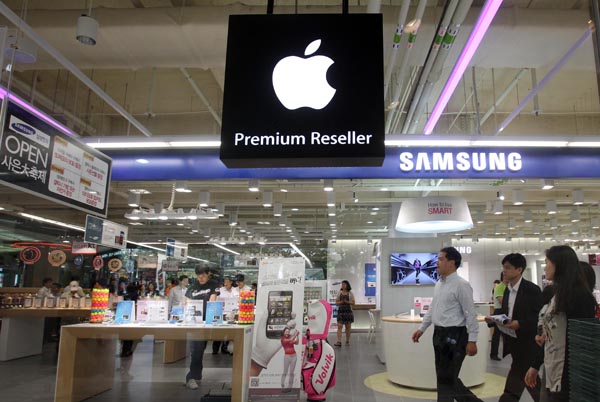 This photo shows two Apple and Samsung outlets facing each other at a discount store in southern Seoul, indicating the two titans’ fierce rivalry. By Kim Tae-seong

Samsung Electronics was dealt a setback in its legal battle with Apple when a court in Mannheim, Germany, ruled in favor of the U.S. company in an ongoing patent infringement suit concerning smartphones on Friday.

Since last April, the two smartphone heavyweights have been locked in numerous suits across the globe as they vie for dominance in this lucrative business area. 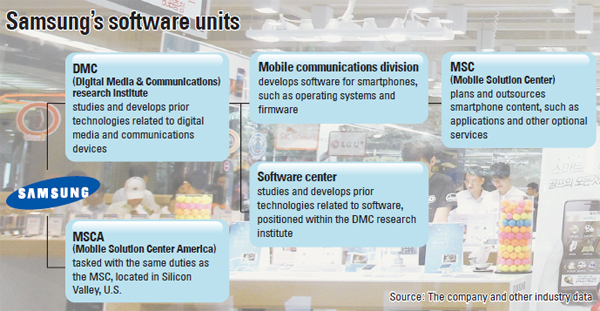 In the third quarter of 2011, Samsung dethroned Apple as the world’s No.1 smartphone maker, but it fell back to second place in the fourth quarter, according to market researcher Strategy Analytics. However, for the year as a whole, the Korean firm held the top spot.

This is quite different from how the situation looked back in 2009, when the smartphone boom kicked off in Korea. At the time, Samsung was a minnow and Apple a giant in the realm of smart devices. 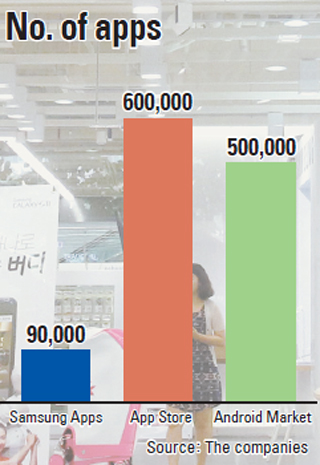 For such reasons, the Korean technology titan has been beefing up its software capabilities since then, taking a cue from Apple and Google - the world’s top vendors of smartphone software platforms.

Samsung even set up its Media Solution Center (MSC) in late 2009 as part of its attempt to overtake Apple in the realm of smartphones. Last summer, it added a new category to its recruitment and human resources system specifically designed to discover and manage software talent.

This last move came around the same time that Google announced it would acquire U.S. handset maker Motorola, which indicated the ever-growing power of software in the world of technology.

This year may see Samsung pursue its commitment to developing software in a more independent manner as it distances itself from the influence of companies like Apple and Google, which influenced it so strongly several years ago.

Software at the center

Samsung announced on Dec. 15 that it will create a “Software Center” at its DMC Research Institute.

DMC, an abbreviation of Digital Media & Communications, refers to one of the company’s two main business pillars: finished goods like TVs and handsets, which it sells to consumers.

The other pillar is parts and components, such as the chips and panels Samsung sells to clients like Apple and Sony, and these fall within the bracket of device solutions.

In fact, Samsung already has several other units responsible for developing software. Its mobile communications division, led by the media-friendly J.K. Shin, develops software for smartphones such as operating systems and firmware, or computer programs contained permanently in a hardware device.

As for the MSC, this group is tasked with developing applications and other content that can be used by Samsung smartphones and tablets. The company is also slated to open a similar operation in Silicon Valley called the Mobile Solution Center America (MSCA).

Samsung officials say what marks out the DMC Research Institute and Software Center as being different from the other bases is that they will be charged with devising long-term, future projects, whereas the rest are tasked with coming up with short-term, lucrative projects.

“The Software Center is like the SAIT [Samsung Advanced Institute of Technology], and now we have the development structure for software, like the one we had for hardware,” a Samsung official said. SAIT, Samsung Group’s R&D hub, opened in 1986.

“The move should be viewed as one of the company’s attempts to put software before hardware, the latter of which had been Samsung’s pride and joy for a considerable time,” said another Samsung employee.

However, Samsung needs smart licensing and partnership deals to make use of all its content and software.

Earlier last month, Samsung announced that it had appointed David Eun as its executive vice president. Eun formerly served as president of AOL Media and Studios, where he oversaw the company’s efforts to become a leading provider of premium content. He also spent time at Google, where he led many of Google and YouTube’s licensing and partnership deals with TV networks.

“The competition to dominate people’s living rooms has already begun, and Samsung Electronics is ideally situated to extend beyond that to connect the entire home and the lives of consumers,” Eun said through a Samsung press release.

Observers say Samsung’s recruitment of outside software experts will likely continue. The company promoted many in-house software specialists in its annual executive-level management reshuffle announced on Dec. 13. Of the 226 executives promoted, 24 were software personnel.

Also, in a president-level management reshuffle announced on Dec. 7, Lee Chul-hwan was promoted one notch to become the president of Samsung’s mobile communications unit in charge of R&D.

Lee, a handset and software expert, was one of the driving forces behind the creation of the Galaxy range of smartphones. This marks the first time that an executive with an R&D background has ascended to such lofty heights.

“That Samsung promoted many of its S-category [S for software] executives is indicative of its strong will to become a software-focused company,” a Samsung official was quoted as telling Korean media.

In contrast, reports have surfaced recently that MSC is being underused given its vast talent pool, made up of 1,000 star software specialists recruited from various companies, including NHN. At the time of its launch, Samsung acted aggressively in poaching talent, which caused quite a stir in the industry.

But Korean media noted how there was only one promotion within the MSC in Samsung’s reshuffle announced in December, with an executive being moved up to the level of vice president. This compares to 34 promotions within the company’s mobile communications division.

Furthermore, Lee Ho-su failed to win a promotion, despite his leadership of the center having been lauded by the government for making such a large contribution to Korea’s software industry.

“There is widespread dissatisfaction within the team, as many people see the MSC as being treated like a subcontractor of the mobile communications division,” one team member was quoted as saying by the Hankyoreh.

Observers also point to the success of Samsung Apps, which has posted huge growth despite its latecomer status compared to Apple’s App Store and Android Market. It offered just 300 apps when it first opened two years ago, but now has more than 90,000.

“As Samsung sold more than 100 million of its Galaxy smartphones, app developers have been flocking to Samsung to make content for the company’s device. So there is no need for the company to develop its own apps anymore. Samsung needs only to choose among the apps these people make,” one insider pointed out.