Lotte, GS flirting with Hi-Mart bid, but not Shinsegae

Lotte, GS flirting with Hi-Mart bid, but not Shinsegae 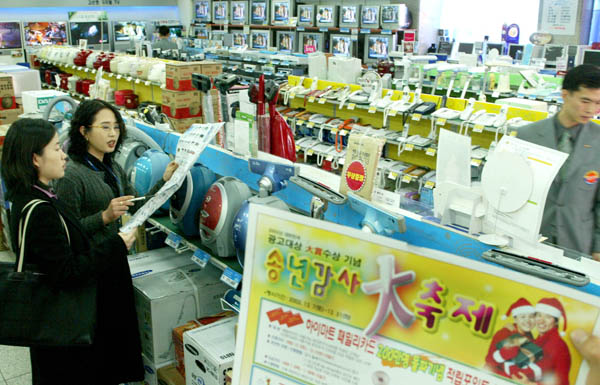 Consumers look at vacuum cleaners at a Hi-Mart outlet in Seoul. A number of conglomerates and foreign companies have expressed interest in acquiring Hi-Mart, Korea’s largest home appliance retailer, which is up for sale. By Oh Jong-taek

After Shinsegae Group decided not to bid for a controlling stake of Hi-Mart, the country’s largest electronics retailer, the competition has narrowed to Lotte Group and GS Group.

Lotte Group Chairman Shin Dong-bin and GS Group Chairman Huh Chang-soo said earlier that they will look into the possibility of making an offer for Hi-Mart if the price is within what they consider a reasonable range.

Shinsegae formerly expressed interest in throwing its hat in the ring, but a senior official was quoted as saying by the JoongAng Ilbo last week that it had reversed its plan as Samsung and LG electronics are expanding the number of their own electronics appliance stores.

But industry insiders say the deal remains attractive to Lotte, a retail conglomerate, and GS, which focuses on energy and retail, because Hi-Mart is still the “unbeatable leader” in electronics category, despite management disputes last year.

If such potential was placed at its disposal, Lotte believes it could achieve significant benefits by combining Hi-Mart’s strengths with its own, especially as Hi-Mart’s outlets tend to occupy prime locations. Lotte started its home appliance retail business in November 2009 by opening its first Digital Park outlet at Lotte Mart’s Seoul Station store.

According to one employee, who declined to be named, “the acquisition would accelerate Lotte’s efforts to strengthen its new business plan given that we planned to take these Digital Park outlets and launch them as high street stores, similar to Hi-Mart.”

Lotte currently operates a total of 12 Digital Park outlets inside the discount store chain, including in Seoul, Jeonju, in North Jeolla, Busan and Daegu.

“Lotte is the strongest candidate for Hi-Mart in terms of synergy,” said Park Jong-ryeol, an analyst at HMC Investment Securities.

“Hi-Mart is scheduled to enter the Indonesian market this year, and Lotte has already invested heavily in China, Vietnam and Indonesia. If Hi-Mart is acquired by Lotte, it can aggressively push for global expansion.”

Other analysts at securities firms said Lotte would enjoy greater synergy by opening its coffeehouse, Angel-in-us, or fast food chain Lotteria next to Hi-Mart outlets.

GS Retail, an affiliate of GS Group that runs the G25 convenience stores, GS Supermarket and drug store Watsons, also sees the potential benefits of buying Hi-Mart after it failed in an earlier bid.

Eugene Group took over Hi-Mart in 2007 at a cost of 1.95 trillion won ($1.7 billion), knocking GS Group out of contention despite the latter offering more money.

Construction and oil are industries that tend to be heavily hit by economic downturns, a trend that has compelled GS to pursue new avenues. However, to ensure success, it has prioritized acquiring a healthy firm with significant experience and a proven track record.

“GS Group specializes in retail, and buying a leading electronics store could maximize its retail network, whereas starting a completely new home appliance business [could be filled with risk],” said one industry source. “But whether GS will be the best choice for Hi-Mart is conjectural as GS lacks experience in the home appliance business.”

Even if one of the two conglomerates is successful in its bid, potential hurdles remain.

One of these, management disputes with Hi-Mart founder and CEO Sun Jong-koo, led Eugene Group to decide to sell Hi-Mart last year. And both Lotte and GS have named store managers as a key stumbling block to any acquisition due to their loyalty to Sun.

Both fear a mass exodus of managers if Sun decides to desert Hi-Mart and establish a new rival electronics retailer.

Officials at Lotte said such considerations have tempered the group’s thinking and put limits on how much it would offer.

“Traditionally, Lotte does not raise the bidding price too high for firms that are up for sale, even if they are in excellent condition,” said the official at Lotte.

“Hi-Mart is already overpriced. It’s Lotte that can generate the best synergistic effects, and Chairman [Shin] is in no hurry to make the acquisition. But if the price is reasonable, we will probably buy it.”

Meanwhile, Citi Group, which is advising on the sale, sent information about the deal to potential foreign and domestic bidders earlier this month. The list of recipients included Haier and Gome of China and Best Buy in the U.S.

A 62.25 percent stake of Hi-Mart is up for sale, which is the combined share owned by Eugene Group, founder Sun and the Hi Consortium.