Are the floating islands sinking?

Are the floating islands sinking? 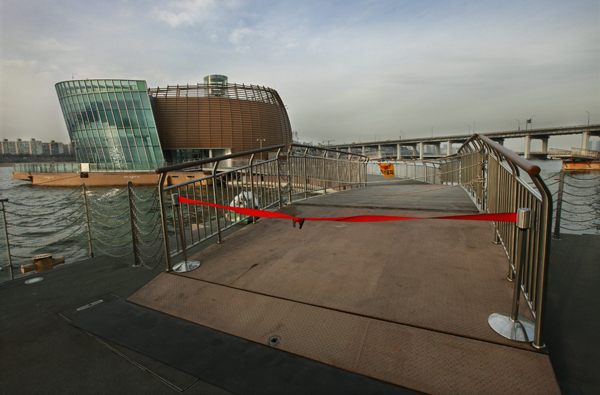 The entrance of a bridge that connects two of the floating islands on the Han River in Seoul is roped off to visitors on Saturday. By Park Sang-moon


Last June, when fur-clad Fendi models walked down the runway on a floating island on the Han River, citizens complained the public project was turning into an exclusive venue for the “haves.”

As it floats now, the floating islands aren’t really working for anybody, privileged or not.

In May 2011, the floating islands, the first completed piece of the Seoul Metropolitan Government’s Han River Renaissance Project, were unveiled to the public after five years of construction.

The city government said the new Floating Island project, which is made of three separate but connected man-made islands, would be the capital’s landmark and would attract more tourists and improve the general quality of life for citizens. 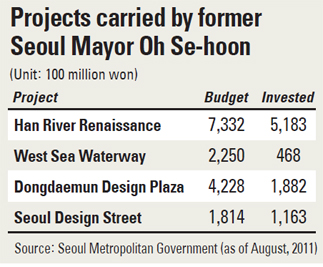 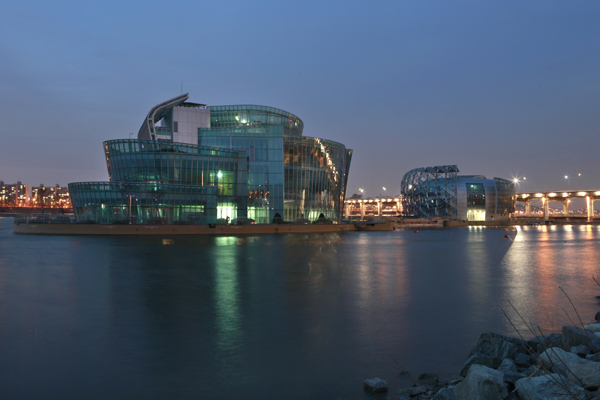 Only a few lights are turned on in the facilities of the floating islands due to lack of activities on Jan. 14. According to the initial plan, the islands are supposed to light up from 7 p.m. to 9 p.m. By Park Sang-moon

The government said it would provide diverse cultural performances and concerts.

However, only seven months after completion, the islands are largely uninhabited - entrance doors of three facilities are chained shut and a sign for a coffee house rolls on the floor inside a locked building.

In early January, when the Korea JoongAng Daily visited, only a couple of people poked around the islands, but soon left, grumbling at the islands’ bleak conditions.

“It looks like it is totally abandoned,” said Kim Yang-tae, a Gangdong District resident. “I heard that the observatory is open to the public, but I might have heard wrong.”

Several construction projects that were ambitiously begun by former Seoul Mayor Oh Se-hoon with the intention of creating landmarks and a better ecological environment have been halted or delayed due to political changes occurring in late 2011, though at least a trillion won have been spent so far.

In 2006, the former Seoul mayor unveiled a series of large-scale construction projects, including the Han River Renaissance, West Sea Waterway, Seoul Design Street and Dongdaemun Design Plaza, which were collectively named “Design Seoul.” The city government has budgeted about 1.56 trillion won ($1.39 billion) for these projects and has already spent 867.6 billion won as of August 2011, according to the Seoul Metropolitan Government.

The Floating Island and Dongdaemun Design Plaza are already completed or nearing completion, but the city government has not been able to provide specific business plans since new Mayor Park Won-soon replaced Oh in October.

The floating islands were completed in September and were planned to be open for business at the same time, but the project has been delayed twice as it is having trouble in selecting a subcontractor to manage the businesses, including the cafeteria and coffee shop. Dongdaemun Design Plaza, which is supposed to be completed this July, has also been delayed one year as the city government has allocated only half of the necessary funds.

“The city government should provide clear and improved business plans for the projects as soon as possible,” Professor Kim Sei-yong of the Department of Architecture at Korea University told the Korea JoongAng Daily. “Leaving the invested projects behind would be another waste of money.”

Who floated the funding?

The majority of the Floating Island project was funded by private investors, who pooled a total of 96.4 billion won, and the project was carried out by Flossom, an urban development company based in Seoul, but SH Corporation - a firm owned by the government and financed through tax dollars that builds infrastructure and affordable housing projects - owns 29 percent of the company’s share, worth 13 billion won.

The rest of the funding for the project, about 83 billion won, is shared by Hyosung Group, a large conglomerate, and Chinhung Corporation, an urban development corporation and an affiliation of Hyosung Group.

When the Korea JoongAng Daily visited the 96.4 billion won worth of islands, they were sitting totally neglected in front of shiny office towers.

Vending machines that were supposed to be filled with canned beverages were empty, and trash, including advertising posters and empty beverage bottles, littered the floor.

Foot bridges that connect the three islands were dismantled, and signs reading “access denied” hung from each bridge. For managing 20,382 square meters (5.03 acres), only two security guards - one at the main gate for a parking ticket booth and the other at the biggest building - were managing the entire island complex.

Parts of the islands were open, including the observatory and trails, in May, but were shut down after the heavy rains of last July and August.

The bridges were dismantled as the Paldang Dam discharged more than 3,000 tons of water during the time, and the islands had to shut down for 73 days last year due to the rising river.

However, the Flossom Corporation’s management wants to keep the islands open during the peak season.

“We’ve decided to change the floating-type bridges to stationary in order to secure more business days in the summer and improve the safety conditions,” Kim Bum-soo, a manager of the Flossom Corporation said. “We’ve submitted a change of design for the bridges and are currently waiting for authorization from the city government.”

In addition, the islands also had to delay the official opening day twice - in September and December - as it has had trouble selling management rights.

Kim said that they will finish the construction in April and also select management as soon as possible. The construction for the new bridges will cost 6 billion won.

“It won’t be that easy,” said Oh Seung-rok, a Democratic Party lawmaker. “They should start the construction work if they want to open it in April because they need at least three to four months for the work. It must be also hard to sell the management rights because the business value of the island is still questionable.”

Oh added that the possibility of delaying the opening until September is high if they don’t begin construction by the end of January.

“Another delay means that the project that had used 13 billion won of citizens’ tax money is in danger of being shut down for one year,” Oh said.

However, the Seoul Regional Construction and Management Administration, a government agency under the Ministry of Land, Transport and Maritime Affairs, hasn’t approved the new design for the bridges.

“We haven’t agreed on the new design due to safety issues that might occur if the stationary bridges are built,” Lee Seung-hak, an official of the administration told the Korea JoongAng Daily.

Meanwhile, the city government signed an adjusted contract with Flossom, extending its ownership of business licenses for the islands from 25 years to 30 years, on Jan. 19. The city government said that it extended the contract as it wanted to balance the loss that is being generated by the delays.

The contract, however, later was criticized by Mayor Park as he is strongly against the island project. The city government said that Park actually signed the contract but wasn’t fully informed of the contract details by his officials.

Park pointed to the city government officials’ poor reporting system and ordered an inquiry of how it really happened.

The Dongdaemun Design Plaza, another major piece of the Design Seoul project proposed by former Mayor Oh, has been under construction since 2009 and is now about 70 percent complete. The plaza was supposed to be completed by July of this year and expected to open in early 2013, but the plan was postponed for a year as the city government has allocated only half of the budget.

The city government said it needs 152.1 billion won for 2012 to complete the construction as scheduled, but right now only has 72 billion won. Due to the delay, about 9.2 billion won of additional expense, which includes personnel expenses and management and storage cost for equipment, is needed.

“The [construction] progress is slowing down since the new mayor has taken office,” a worker at the construction site said. The city government said that the budget for Dongdaemun Design Plaza isn’t fully allocated as it has decided to improve the content that will fill the plaza’s exhibition halls.

“If the contents inside the facility get changed, it is possible the interior will also change,” Cha Jae-woon, the manager of the Dongdaemun Design Plaza told the Korea JoongAng Daily. “It may cost additional fees, so we’re trying to prevent waste.”

The 65,232-square-meter plaza will consist of a series of exhibition halls and public libraries that will exhibit both domestic design and new design products from foreign countries in Jung District, central Seoul.

“The city government should support the projects, especially for those that have already cost big money, and finish its completion,” Lee Chang-moo, a professor at the Department of Urban Planning at Hanyang University, told the Korea JoongAng Daily.