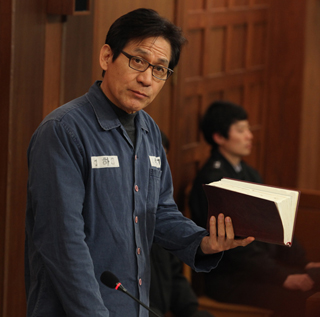 A scene from the film “Unbowed.” [JoongAng Ilbo]

A film about a disgruntled professor who fired a crossbow at a judge is causing citizens to question their judicial system.

The movie, with the English title “Unbowed,” about a five-year-old finalized legal case, is producing controversy over judgments from Korean courts. In the last few weeks, people related to the trial, including the plaintiff, lawyers and judges, had heated conversations on social networking services - attracting a large Korean audience that have raised demands for a retrial, as a possibility of fabricated evidence was implied in the movie.

Meanwhile, the Supreme Court gave its official stance on the movie on Friday. The court said those with an unfavorable outcome in the trial are trying to create distrust for Korean courts. It added that the movie is clouding the nation’s judgment by showing biased scenes that lead people to stand against the court.

“Unbowed” was released on Jan. 18. It tells the story of a former professor, Kim Myung-ho, 55, at Sungkyunkwan University. In 1995, Kim pointed out an error in a math question in the school’s admission test, but the school fired him for slandering colleagues.

Kim filed a series of lawsuits against the school in order to get his job back but failed. He was then imprisoned for four years after firing a crossbow at Judge Park Hong-woo, who was the presiding judge over Kim’s appeal trial, in front of the judge’s house in 2007. Professor Kim was released from prison in January 2011.

The movie, however, suspected that the evidence might be fabricated by investigators involved in the case by highlighting Professor Kim’s insistence, which pointed out that both marks from the arrow and bloodstains weren’t found on Judge Park’s dress shirt. Kim said that Park was wearing three pieces of clothes at the time, and the shirt, which Park wore between his vest and undershirt, is the only piece of clothing that doesn’t have bloodstains. This is leading some to believe that Park wasn’t actually hit by the arrow from the crossbow.

After the release, Kim and his attorney Park Hoon, 46, began posting opinions that raised doubts about evidence fabrication and the fairness of Korean courts’ judgments through their personal homepages and blogs. “The only reason we couldn’t find the bloodstains was because investigation agencies involved in the case fabricated the evidence,” one of Kim’s posts read. Kim also rationalized his shooting at the judge through another post that read, “It [the shooting] was a justifiable means of protest for the Korean courts’ misjudgment.”

However many incumbent judges, including Chung Young-jin, a senior judge at Suwon District Court, expressed the opposite stance to Kim. Chung said that the plaintiff can’t be declared not guilty of attempted murder only because the weapon wasn’t provided as evidence because there was a large amount of evidence, such as doctors’ medical certificates and eyewitness evidence, that proved the shooting attack. The controversy increased as more and more people were involved in the dispute through SNS, such as Facebook and Twitter.