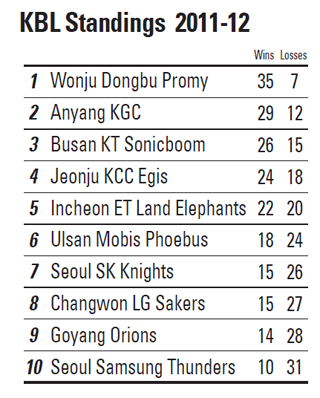 Just about a month away from the end the regular season, teams that are teetering on playing in the six-team postseason will make their final push.

Ulsan Mobis Phoebus, currently sixth in the table, will have two crucial away games this week. The team faces the seventh-place Seoul SK Knights on Thursday followed by the rising Goyang Orions, who have seven wins and three losses in their last 10 games, on Saturday.

Phoebus recently received good news, with forward Ham Ji-hoon returning to the team on Saturday after finishing his military service with Sangmu. The 198-centimeter-tall Ham was the regular season and postseason MVP in the 2009-10 season, leading Phoebus to the championship title that year.

Pundits expect Phoebus will have a big boost in the playoffs, if the team is able to hold on until then. If Ham gets used to the team’s organized play and cooperates well with guard Yang Dong-geun and center Terrence Leather, the team will be a dark horse in the postseason.

The Knights are hoping for similar good fortune as their foreign player Alexander Johnson, who leads the league in scoring and rebounds, could come back to the court this week after suffering a knee injury. The team is currently on a four-game losing streak.

The league’s last place Seoul Samsung Thunders will try to extend their current winning streak. The Thunders, who at one point suffered a 14-game losing streak, have won their last three games, but that will likely end on Friday when they host the league’s No. 1 team, Promy. In fact, the Promy is looking to set a franchise record winning. The team has won its last nine games; the Promy can clinch the KBL regular season title with seven wins in the remaining 12.