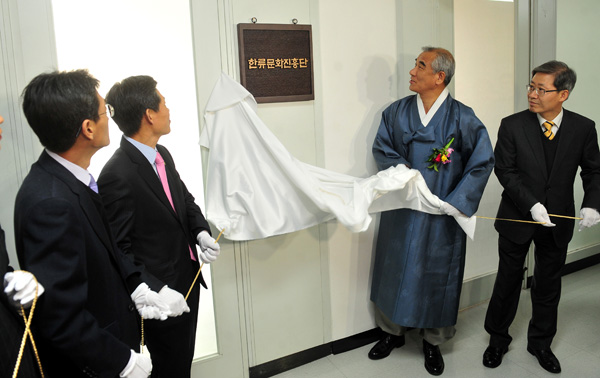 Choe Kwang-shik, minister of culture, sports and tourism, second from the right, and government officials participate in a signboard-hanging ceremony for the K-Culture Promotion Task Force at the ministry’s headquarters in Waryong-dong, central Seoul, yesterday. [YONHAP]


The Ministry of Culture, Sports and Tourism took an official step toward capitalizing on the momentum of the Korean Wave, or Hallyu, by launching a new organization tentatively named the K-Culture Promotion Task Force.

The new body will first focus on fostering and promoting traditional Korean culture domestically and globally by using the already well-received Korean dramas and K-pop artists as a stepping stone, Culture Minister Choe Kwang-shik said in a press briefing yesterday.

Four weeks earlier, Choe told reporters that the ministry would come up with a task force specializing in the Hallyu, saying, “It is necessary for Korean pop culture, including K-pop, to influence the overall cultural sphere, ‘K-culture,’ and eventually create added value out of it.”

The minister reiterated his message at the task force’s official launch. “Although traditional culture is the rich repository of cultural resources that may enhance added value of such related industries as arts, content and tourism, and raise national brand image, the efforts to modernize and recreate traditional Korean culture have been lacking,” Choe said, clad in a deep-blue durumari, or traditional Korean coat.

The former head of the Cultural Heritage Administration took the helm of the ministry last September.

For the new task force to spearhead “strategies to achieve the creative development of traditional culture,” the ministry will set aside a 33.5 billion won ($29.8 million) budget for this year and plans to inject an additional 230 billion won in the following two years.

The K-Culture Promotion Task Force will be led by Kwak Young-jin, the first vice minister, and the members will consist of heads of different departments and bureaus under the ministry.

As for the adoption of traditional Korean patterns for the designs of public buildings, Choe used the example of having a newly built museum take the shape of the Korean alphabet’s mieum, since misulgwan, or art museum in Korean, starts with the same character.

Choe also said the task force plans to encourage visitors to dress in hanbok when visiting hanok villages, although he did not elaborate on specifics. Advising government officials to appear in hanbok during major state affairs, such as ceremonies celebrating the appointments of ministers and vice ministers, is also being discussed with the Ministry of Public Administration and Security.