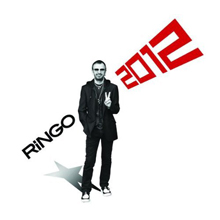 One look in the mirror was all it took for ex-Beatle Ringo Starr to find the best producer for his 17th solo record, “Ringo 2012,’’ Starr claims. Unfortunately, looks can be deceiving and Starr might have done better shopping around someone to make this release more interesting.

As it stands, “Ringo 2012’’ is equal parts reflection and rehash. The subject matter, mostly composed by others, is fond memories of days gone by for Starr, with a bit a make-love-not-war ethos sprinkled in for good measure. When presented with Starr’s dry vocal approach, most tracks lack the required luster to make this album stand out.

“Ringo 2012’’ is blues, rock and a touch of honky-tonk. The melodies aren’t bad. They’re just too well-traveled. From the first track “Anthem’’ to the final salute in “Slow Down,’’ there’s not much here to show us that Starr has challenged himself beyond a formulaic delivery. “Wings’’ is a nice song, but he’s already recorded it years ago on his sixth album.

There are some moments when the fit is fine, as on “Rock Island Line.’’ This bluesy standard made its way to Starr by way of Lead Belly and so-called skiffle bands in Liverpool, England, where Starr paid his early dues in the Eddie Clayton Skiffle Group. The song gets a nice boost from blues guitar standout Kenny Wayne Shepherd, who sizzles throughout. AP