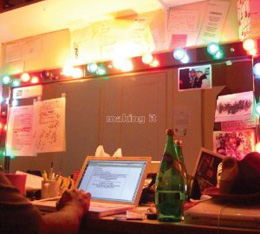 “Making It” is a breakup album that gives voice to both sides of the story. Singing duties are shared by Mark Stewart (aka Stew) and Heidi Rodewald, an ex-couple responsible for the Tony Award-winning play “Passing Strange,” who continue their creative collaboration with the band the Negro Problem.

There’s lots of candor but no rancor as the couple contemplate heartache with humor rather than hostility. “Love is a great gig, but the pay is crap,” Rodewald sings on “Love Is a Cult.”

As usual, Stew mines a deep reserve of musical influences to frame his tunes in an engaging pop setting, with touches of jazz, rock, R&B and Broadway. The resulting blend is part Bacharach, part Magnetic Fields and all good.

“Making It” kicks off with a brief instrumental that sounds like the theme to a TV show. Then comes “Pretend,” a paean for pop: “Songs are dumb, but they don’t lie,” Stew sings. Later topics include methamphetamine (“Speed”) and racial stereotypes (“Black Men Ski”), but the focus is on romance gone awry. AP