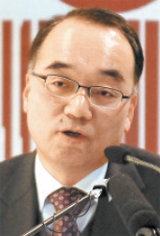 Korea’s top financial official publicly opposed the adoption of the so-called “conglomerate tax” currently being pursued by opposition party lawmakers, saying that the measures under review will not only hurt the global competitiveness of Korean companies, but also discourage foreign direct investment.

“In some respects, the thrashing that each party is dealing out on conglomerates has to do with the global backlash against polarization, but we must be guarded against an excessive denouncing of the haves and the powerful,” Minister of Strategy and Finance Bahk Jae-wan said at a meeting with foreign journalists in central Seoul yesterday. He said the conglomerate tax being debated exceeds the global standard in terms of proportionate taxation.

The Democratic United Party is currently reviewing two ways to increase the taxes paid by conglomerates. The first takes as taxable income the dividend payments that a parent company receives from its subsidiaries. The second would tax interest payments from loans taken out to invest in an affiliate company, which are currently exempt.

Bahk also commented on a recent trend that is seeing third-generation chaebol scions make inroads into bakeries and other business areas, thus encroaching on the territory of mom-and-pop enterprises.

“It would be a different matter if conglomerates participated in [such business areas] because large-scale research and development or global marketing was needed, but opening expendable businesses by using the networks and brand of the entire conglomerate structure is problematic,” he said.

Concerning macroeconomic issues, Bahk said the Korean economy may bottom out in either the first or second quarter.