Beyond ‘Afghan Girl’ to AIDS in Asia

Beyond ‘Afghan Girl’ to AIDS in Asia 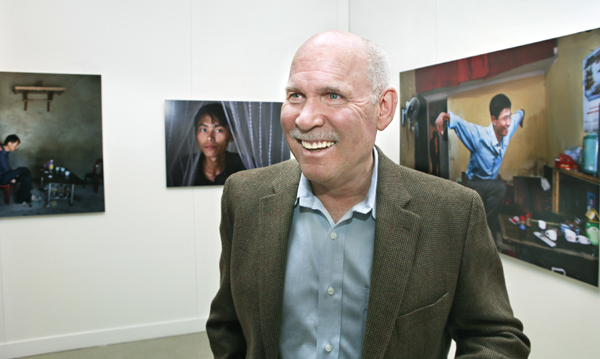 Steve McCurry, whose 1984 photo “Afghan Girl” is still cited as one of the most recognizable images in the world, speaks about his new Hangaram Art Museum exhibition, “Access to Life,” in which he and seven other photographers document the struggles of AIDS victims and their families. By Park Sang-moon


Steve McCurry’s 1984 portrait of an Afghan girl with haunting green eyes pierced the hearts of a generation around the world. Featured on the cover of National Geographic’s June 1985 issue, it is still cited as the most recognizable photograph of the past century.

McCurry says that, like the many who have seen the photo, the image remains etched in his mind to this day.

“I knew that picture was strong but there was no way of predicting it would be that strong,” he told the Korea JoongAng Daily last week at the Hangaram Art Museum, where his work is part of the exhibition “Access to Life.”

“There is a genuine, authentic quality to that moment that really can’t be replicated.”

But it would be a mistake to equate McCurry’s prolific career with that single, iconic picture. Since his early days as a freelance photographer, when he flew to India in the late 1970s with just two suitcases in hand, McCurry has shot a vast range of award-winning photographs in some of the most desolate and dangerous parts of the world, including Afghanistan, Beirut and Cambodia. His fierce determination and courage, including the time when he crossed the Pakistani border into Afghanistan right before the Russian invasion, speak for itself in his numerous, highly influential photographs, including “Red Boy” and his “Women of Afghanistan” series, which have helped give a human face to the consequences of war. 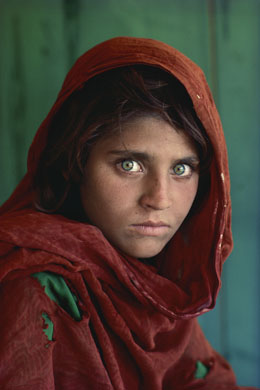 The silver-haired sexagenarian still travels more than six months of the year. For his latest project, carried out in association with seven photographers from the Magnum Photos agency and The Global Fund to Fight AIDS, Tuberculosis and Malaria, McCurry photographed AIDS victims in Vietnam who, through the project, were given antiretrovirals for the disease. Through the photos, we see their journeys, some ending in death and others as stories of survival.

These photos are part of the “Access to Life” exhibition, which continues through March 4 and also includes images of HIV-infected people in nine countries by the seven other photographers.

The Korea JoongAng Daily caught up with McCurry to discuss the exhibition, the beginnings of his career and his philosophy on photography.

Q. Could you give us a bit of background on the exhibition and how the project started?

A. This project was a collaboration between The Global Fund and Magnum Photos. I was able to choose which country I wanted to photograph in, and I’d never been to Vietnam, so I thought this would be a good choice for me.

The project started in 2007. We wanted to find places that were a combination of urban and rural. Since we had to work with the ministry of health [in each country], we were kind of limited in our choice of families and locations. In the end, we settled on these three families.

The beauty of the whole project was that if these people that had been infected followed the program and took the medicine when they were supposed to, there was a high probability that they could survive. But they had to follow the program. In my case, only one of the three men I photographed survived. So it’s not 100 percent, but it’s certainly effective. 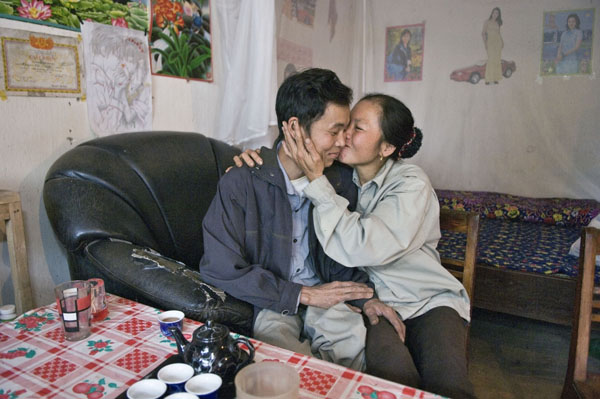 You must have encountered some heartbreaking stories. Is there a particular person or situation that has stayed with you?

The worst moment was when we went to the hospital with the young wife of one of the men. We were with her when they discovered that she had also been infected with the virus. She was 20-years-old or something, very young. Here I am, with somebody getting the most devastating news of their life. You know, here she has an infant and she’s actually at the beginning of her life and in a moment she is told.?.?. Can you imagine being told that?

This was a devastating moment and it was a very private moment. So I was very reluctant to photograph her because I know that people want to be left alone. But the thing about AIDS is that the only way we can defeat it is by confronting it and by not shying away. And the pain of the young woman, I thought, was very important component of the story, so people looking at the pictures can understand what it really is like.

You go to all of these war-torn, dangerous parts of the world and take photos of people in desperate situations. When you are photographing these people, do you ever feel guilty about documenting their misery?

You have to look at your motivation and examine why photographers do this. What’s the point? What’s the objective or benefit? The way we learn about the world is through the media, through people like myself - journalists and reporters. An informed public can actually help solve these problems or influence decision-makers.

Especially with projects like this one, you have to tell the story because there are so many misconceptions about AIDS and there is still a stigma. I can’t speak for everybody’s motivations for going to photograph misery but I think that stories like this one had to be told.

How do you get the people you photograph to open up emotionally and be vulnerable?

There is chemistry, a connection which you establish with somebody through a photo, and to do so, people have to feel comfortable and relaxed. I think if people feel respected, if they feel that you are treating them as an equal, not as a subject, and if you relate to them as a real person, they understand that this is a good thing that we are going to do now. Humor is a very important component because even if you don’t speak someone’s language, you can joke with somebody, and if the joke is directed at myself, it helps to create a friendly atmosphere. A lot depends on your power of persuasion. It’s convincing somebody in a very short amount of time to collaborate with you and accept you and all that. I think if you feel good about yourself and your intentions, that is conveyed.

Much of your work has been in Asia. Why is that?

When I started to travel as a freelance photographer, I came to India. That’s where I started, and I spent two years there. Then, suddenly I started proposing stories to magazines from India, so I ended up spending years in India, Pakistan, Nepal, Afghanistan.?.?.it was just kind of a bit of a coincidence.

But I traveled all over the world many times and I think that there are so many facets to Asian culture, that it’s unrivaled in multi-dimensional ways. Just take India, you have all those religions in one country - Islam, Buddhism, Christianity, Hinduism, a Farsi community .?.?. And it’s a culture which goes back thousands of years. They were doing things in China thousands of years before the United States was even discovered and long before Europe was really developed. 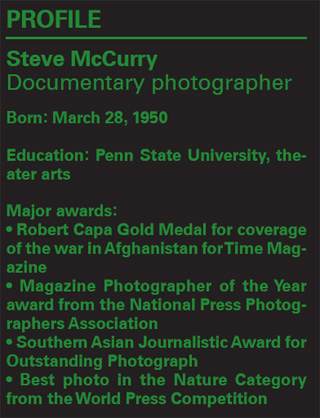 You obtained your degree in theater arts and studied cinematography and filmmaking. What was it about photography that drew you in?

You know, the only time I ever think about film now is when I’m asked about it in interviews. [Laughs.] With photography, you can do it any time, any place, you can take pictures on the street. When I was at school, making motion pictures was very expensive, but with photography, the film is very cheap so I was able to get into the field more easily. It’s also more of a solitary, individual effort, but as filmmaking goes, it is this team effort and you have to rely on other people. And I always like to go on my own and shoot. With filmmaking, there was also having a script, a plan, there was a lot of pre-production planning, a lot of complicated editing at the time, whereas photography, it’s just simple, you can walk down the street and take pictures.

Speaking of film and cameras, Kodak recently declared bankruptcy. What are your thoughts about that?

Now I only use digital film but nevertheless it’s very sad. It’s like the passing of an old friend. When I was staring out in photography, Kodak was the only game in town. We all used Kodak film. But there is a transitory quality to life in general and nothing lasts forever. It’s just that it’s sad when you are actually witnessing the demise. But that’s the nature of the game.

Many describe your photo “Afghan Girl” as the most recognizable photograph in the world today. What is it about this photo that continues to resonate so much and with so many people?

There are several elements to that photo. It’s not just one thing. I think one thing is that it’s a very genuine, authentic, real picture. She’s not posing for the camera, her expression is a bit ambiguous, she’s not smiling, she’s not frowning.?.?.and she’s very pretty, that’s an important part. But she’s pretty, yet also with that beauty there is a bit of dirt on her face, her shawl is ripped, but then she has these incredible eyes, very beautiful, beautiful eyes and the color works very well together and there is a beautiful light on her face.

People have been trying to duplicate that picture but no matter how beautiful the girl is, it’s just the different elements and trying to get it together to come out a certain way like that photo is difficult.

I’ve heard that you are now in contact with her. How did that happen?

We discovered her in 2002, 17 years after we took the photo, and we are actually in contact with her on a regular basis now. Just two months ago, we bought her a house to live in so that she could live with her family. Up until two months ago, she was living in a one-room but now she has the house, a kitchen and all this stuff that she needs. Unfortunately, her husband just died three weeks ago.