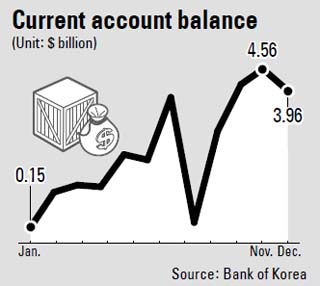 Korea posted a surplus in its current account balance for the 14th consecutive year in 2011 on the back of strong export growth, but the surplus shrank from 2010 as the sovereign debt crisis in the euro zone took its toll on the heavily export-reliant economy.

According to the Bank of Korea (BOK) yesterday, the current account posted a $27.7 billion surplus last year, extending a rally that dates back to 1998. Last year’s surplus, while somewhat downsized, still ranks as the fifth-largest recorded in the nation’s history, but falls short of the record $32.8 billion set in 2009.

The strong result was largely fed by resilient export growth, which improved 19.3 percent to $556.5 billion last year from 2010, when imports expanded aggressively.

Imports continued to outpace exports last December, climbing 13.6 percent on-year to reach $45.5 billion as the price of raw materials such as crude oil and gas shot up. Exports grew a weaker 10.8 percent to finish at $48.9 billion as global demand for telecoms devices and display panels fell.

Weaker demand from Europe also played a significant role, plummeting 19.7 percent in December after registering a 5.1 percent slide the previous month. Although shipments to the financially troubled Continent still rose 4 percent for the year, this pales in comparison to Korea’s export growth to Japan (40.9 percent). Shipments to the U.S. also fell by a similar level in the previous two months.

As a result, the current account surplus posted a smaller surplus in December than November, shifting down from $4.56 billion to $3.96 billion. It is expected to further contract this month.

“We may see a deficit in January,” said Kim Young-bae, head of the BOK’s economic statistics department, adding that this would not necessarily indicate that the country’s strong economic fundamentals are under threat.

But the BOK official stressed there are still positives to be taken from the surging imports.

“In fact, rising imports could lead to additional purchases of equipment and facilities, which could later serve as foundations for further export growth,” Kim said.

Yet fears remain as the euro zone debt crisis that is putting a dent in the global economy is showing few signs that it will improve in the short term.

U.S. Federal Reserve Chairman Ben Bernanke projected last week that the low-growth trend in the global market will likely continue for at least two years. The International Monetary Fund also lowered its economic outlook for the global economy, as well as for China, and downgraded Korea’s outlook by 0.9 percentage point to 3.5 percent.