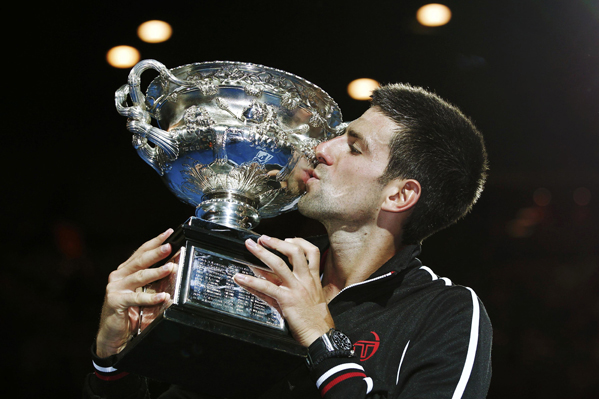 Novak Djokovic of Serbia kisses the Australian Open trophy after defeating Rafael Nadal of Spain in their men’s singles final match in Melbourne on Sunday. [REUTERS/YONHAP]

MELBOURNE, Australia - Rod Laver was the last man to complete the grand slam back in 1969 and after Novak Djokovic’s astonishing win in the Australian Open final it looks like the Serb could be next.

Laver was watching at Melbourne Park as Djokovic claimed his fourth grand slam title in 12 months by beating Rafael Nadal 5-7, 6-4, 6-2, 6-7 (5), 7-5. And if his blistering run of form continues and he wins the French Open in June he will hold all four major titles at once.

The true grand slam - winning all four trophies in a single calendar year - will also require him to retain his Wimbledon and U.S. Open titles.

Many would bet on Djokovic succeeding where both Nadal and Roger Federer have failed, after the once delicate world number one survived a 5 hour, 53 minutes - the longest Grand Slam singles final in the history of professional tennis - slugfest with the snarling Spaniard.

“You’re going through so much suffering your toes are bleeding. Everything is just outrageous, you know, but you’re still enjoying that pain.”

Important victories seem to spur Djokovic to greater heights. After winning the 2010 Davis Cup with Serbia, he compiled a 43-match winning streak which was only halted after six months by Federer in the French Open semifinals.

Last year he collected the Australian Open, Wimbledon and U.S. Open trophies among 10 titles, and went 70-6 despite struggling with injury from September onwards.

Now Djokovic is targeting the French Open, the only major to elude him, which would make him a strong bet to complete the elusive grand slam.

“I’m prioritizing grand slams this year, as every year, and the Olympic Games. I think that’s one of my highest goals,” he said.

“So I want to do well and I want to get to my first final at least in Paris. I have never been in the final there, and I have a feeling that I’m ready this year to achieve that.”

Sunday’s final, which stretched into the early hours of Monday, proved Djokovic has the capacity to tough it out, something which had seemed in doubt earlier in his career when he was known for pulling out of big matches.

And from regular beatings at the hands of Federer and Nadal, the Serb is now the man handing out the punishment.

“I was in that position a couple years ago, you know, losing most of the semifinals and finals against him [Nadal] and Roger in grand slams, so I know how it feels,” he said.

“I really thought what I said sincerely on the court, is that unfortunately there had to only be one winner because we both gave it all. We both put 100 percent of our abilities on the court and played to the last moment.

“Unfortunately there couldn’t be two winners, but he definitely deserved to be a winner as well tonight. You know, I would be saying same thing if I’m sitting here as a loser.”

And for Djokovic, winning his third Australian Open title in front of Laver, who was celebrating the 50th anniversary of the first of his two grand slams, gave the occasion added significance.

“I’m very proud just to be part of this history, part of the elite of the players that have won this tournament several times,” he said.

“I was very flattered to be playing in front of Rod Laver, in front of the all-time greats, and in front of 15,000 people that stayed until 1:30 a.m.