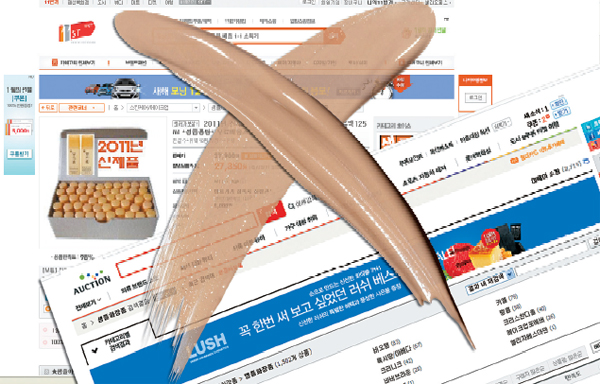 Online retailers Auction and 11th Street are selling cosmetic samples in bulk for up to 90 percent cheaper than full-sized products before a revised cosmetics law takes effect on Feb. 5.

As the sale of various cosmetic samples ranging from makeup to perfume to skin-care products will be officially banned from Feb. 5 in accordance with a revised cosmetics law, local online retailers are selling en masse in hopes of luring consumers looking for a last-minute bargain.

Cosmetic samples were originally created as free handouts distributed in handy containers that range from 5 to 15 milliliters as a way to allow potential consumers to test the products before purchasing more expensive sets.

But some retailers exploited the business model by selling cosmetic samples on major shopping Web sites in Korea, a trend bolstered by the economic downturn.

“Normally buying cosmetic samples in bulk at the online market price is between 70 and 80 percent cheaper than buying an actual product,” said Park Ji-na, spokesperson for 11th Street, an online retailer of SK Group. “Customers who opted to use cosmetic samples by buying them in bulk rather than buying complete products now want to secure them in stock before they disappear from the market. Sample cosmetics have been popular and they’re the No. 1 and No. 2 most sold items in our cosmetic section.”

Park said the response from customers was overwhelmingly positive as sales of samples between last Wednesday to last Sunday were 70 times higher than the previous week.

Cosmetic firms have expressed concerns over the safety and genuineness of sample products as they don’t specify manufacturer or expiration dates.