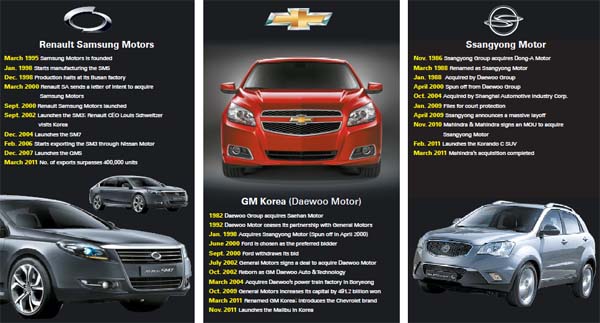 Hiroshi Okuda, the former CEO of Toyota Motor, once stated that there will only be five or six major automakers left within the next few decades, and that each will have to sell at least 5 million vehicles a year in order to compete globally.

Clearly, consolidation is occurring in the auto industry and making the traditional concept of national identity obsolete, as many of these partnerships and mergers are crossing national borders. Korea is no exception.

Among the five automakers in the country, all but Hyundai Motor and its affiliate Kia Motors remain in the hands of Koreans, while Daewoo Motor, Samsung Motors and Ssangyong Motor are all controlled by foreigners.

At the time of consolidation, local critics feared that acquisitions by global players like General Motors could destroy the local auto industry and drive other domestic carmakers out of business. However, this has not been the case. Rather, the threat to local manufacturers has come from foreign imports. 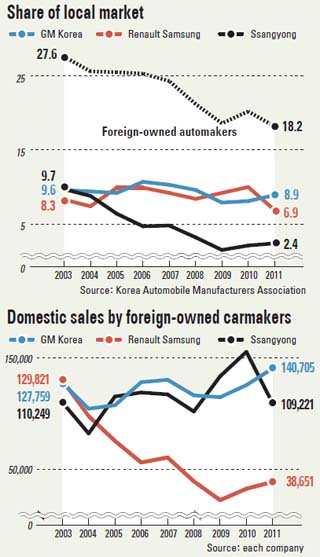 Now GM Korea, Renault Samsung Motors and Ssangyong Motor are dealing with one of the hardest periods in their respective histories. Despite sharing global technologies and platforms, they have been losing their market shares to Hyundai and Kia, which together form the fifth-biggest automaker in terms of global sales.

The combined market share of GM Korea, Renault Samsung and Ssangyong motor in Korea was 27.6 percent in 2003, but since then it has gradually declined, falling to 18.2 percent last year, the lowest share in nine years. Meanwhile, the aggregate market share of Hyundai and Kia climbed from 70.4 percent to 74.5 percent over the same period, although there were some fluctuations.

Now the three automakers are struggling, and the situation is being compounded by global economic woes. Car sales fell sharply in Korea last November from the previous month as the fallout of the financial crisis in the euro zone rippled through the country. Although sales improved a little in December, they remained significantly worse than one year earlier.

Renault Samsung, in particular, is finding its problems mount up. As the subsidiary of French automaker Renault SA depends on Japanese imports for key components such as transmissions and engines, it suffered a shortage of parts in March last year due to the earthquake in Japan. The high yen has also eroded its profits as this made imported parts more expensive. The problem is that, while 2011 was a trying year for the company, the worst may yet be to come.

Renault Samsung’s dependence on Japanese components cannot be easily overcome, even though its CEO Francois Provost has said in recent interviews that he will raise the proportion of components supplied from Korea to 80 percent by next year.

“We can’t change our suppliers right away,” said a Renault Samsung manager. “It takes three to four years for a supplier to develop and produce key components like transmissions and engines. Furthermore, we need to guarantee enough volume to convince suppliers to produce parts for us.”

In 2010, the carmaker saw global sales hit a new record by exceeding 270,000 units, leading annual revenue to pass 5 trillion won ($4.4 billion) for the first time. However, in the same year, despite such a strong performance, its operating ratio, or ratio of operating profit to sales, plunged to 0.06 percent, meaning it barely made a profit. In contrast, Hyundai posted an operating ratio of 8.8 percent and Kia 7.2 percent in the same year.

The situation snowballed last year, as Renault Samsung’s domestic sales sank 29.8 percent to 109,221 from 155,696 in 2010. Its global sales also declined 9 percent to 246,959 as the global economy contracted, forcing it to idle production at the end of last year due to the increasing number of unsold vehicles. Although the company has yet to announce its annual performance for 2011, it is expected to post its first loss since 2009.

The value of the yen and euro has surged in the wake of the 2008 global financial crisis, which has driven up the cost of importing components. As the yen remains high, such costs are likely to remain the biggest thorn in the company’s side for the short term.

In 2010, it imported 1.06 trillion won worth of components, also a record. When calculated per vehicle, costs nearly tripled from 1.3 million won in 2006 to 3.9 million won in 2010, according to the Financial Supervisory Service.

“The cost of importing components like transmissions and engines more than doubled from several years ago,” said Lee Nam-seok, a professor at Choong-Ang University.

“Renault Samsung sells twice as many vehicles globally as it did in 2007, and its factory in Busan was near full capacity last year. But its profitability has become so bad that it recorded a loss last year,” Lee said. “This means there is a serious problem with its cost structure. There is certainly an issue with setting transfer prices [from parent to subsidiary, or vice versa] when importing components.”

Lee also questioned Renault’s commitment to its Korean subsidiary. “It has been 12 years since Renault acquired Samsung Motors, but it has never made a large infrastructure-related investment,” he said.

The question of transfer prices has become a thorny issue for Renault Samsung recently.

“Many multinational companies recoup their investment through royalties or by selling components, and there is technically nothing wrong with this,” said one local analyst who declined to be named. “Even Korean companies do this with their foreign subsidiaries.”

Renault Samsung also has to deal with its limited product lineup. The company only has four cars in the market - the SM7 full-size sedan, the SM5 midsize sedan, the SM3 compact sedan and the QM5 sport utility vehicle.

“Renault Samsung relies too much on a small number of vehicles. Put simply, the company lacks flexibility,” said Kim Pil-soo, a professor of automotive industry studies at Daelim University College. “With only four vehicles, it is hard for dealers to reel in customers.”

Meanwhile, Ssangyong had a successful year last year, rolling out its first new car in three years shortly before the company was acquired in March by India’s Mahindra & Mahindra.

Ssangyong commanded a 9.7 percent share of the domestic market in 2003, but the departure of its former parent, Shanghai Automotive Industry Corp. (SAIC), coupled with rising prices of gasoline, took a toll on sales.

However, critics say that Ssangyong still needs to work hard to regain consumers’ trust and keep them hooked with a new series of vehicles. Its lineup is also somewhat bland, with few vehicles apart from the Korando C standing out from the crowd, and many models harboring old and outdated styles.

“It is still early days in terms of Ssangyong’s recovery,” Kim said. “It needs at least three new models a year that can catch people’s attention. But there have been no new models in the pipeline since the release of the Korando C, and if it takes Ssangyong too long to roll out new models, it will be hard for it to raise its market share.”

Whether the financial resources needed to develop and roll out new vehicles will be made available will ultimately depend on the generosity of its new owner, but industry insiders do not expect the Indian outfit to produce significant financial backing.

Ssangyong Chairman Pawan Goenka, who doubles as the president of Mahindra’s automotive and farm equipment sectors, responded to a question on its future investment in Ssangyong recently by saying that the subsidiary will have to support its research and development efforts using the proceeds of its own sales, as it has no debt.

GM Korea also had a big year in 2011 as it dropped the Daewoo brand and adopted a new name from its parent company: Chevrolet. The company launched eight new vehicles, including its midsize Malibu, the crossover Orlando and the Camaro sports car - a record number of new vehicles launched by a single company in any one year in Korea.

“It launched an aggressive marketing campaign and was fairly successful,” Kim said.

But its ambitious move did not go exactly as planned, even though the launch of the Chevrolet brand was considered a success. Its much-heralded Malibu only sold 1,554 units in December - whereas Hyundai sold 9,160 units of its Sonata - and it fell short of its targeted 10 percent of the local market last year.

Furthermore, the cars designed by GM Korea in the U.S. for a global market also failed to satisfy the tastes of Korean consumers as they, especially their interiors, were considered too American. They also had lower levels of fuel-efficiency than most of their Korean rivals, which compounded the carmaker’s less-than-favorable reputation.

“It takes time for a company to change its reputation. It’s not something that can happen overnight,” said one domestic analyst. “Although the company changed its name and brand, people still remember the old name.”

Insiders say GM Korea may have a harder time catching up with Hyundai and Kia this year as it has already shown most of its hand by launching so many new models in 2011. It only has a few tricks left up its sleeve this year, including the introduction of its new Corvette.

The three automakers also face heated competition on the domestic front from Hyundai and Kia.

“In the last few years, the quality of Hyundai’s and Kia’s cars has improved dramatically, as most people would probably agree,” said Kim of Daelim University College. “The three automakers have not been able to catch up with Hyundai and Kia in terms of quality.”

Kim said the answer lies in tailor-making more models for Korean motorists to drive up their respective domestic shares, which would then give their overseas sales a boost. All three export more models than they sell in Korea.

“If any of their domestic market shares fall, they cannot do well overseas,” Kim said. “On the other hand, if they do well locally, they are likely to do well abroad, too.”

Lee said the huge dominance of Hyundai and Kia in Korea has started to draw attention to whether the domestic market is fair or not.

“There needs to be fair competition for the sake of consumers, but that is impossible,” he said. “The situation in the market has deviated from what would elsewhere be considered ‘normal’.”