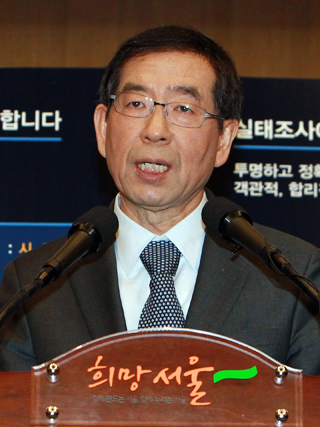 The Seoul Metropolitan Government said yesterday that it will re-evaluate its “new town” development projects through a series of feasibility studies that could ultimately determine their fate.

During a press conference at City Hall, Seoul Mayor Park Won-soon said that the city will hear from residents and landlords in 610 areas that have been designated for the project, which aims to create new residential areas after old ones are demolished.

The city government said that it will make a determination on the future of each area based on the studies, which will evaluate each area’s business potential and capital requirements while also taking into account the opinions of current residents and landlords.

The studies will be conducted in two different ways, based on whether an area has formed a committee to represent landlords and residents.

For the 317 areas without such a committee, the studies will be led by district office heads in conjunction with civic experts, professors and civil servants. If more than 30 percent of the group is against participation in the new town project, the city will lift the designation by the end of the year.

For the remaining 293 areas that have formed committees, a different process applies. First, more than 25 percent of residents and landlords in an area must agree to participate in the study. If a study is conducted, the area committee is then free to determine whether to remain with the project once the study results are released. To withdraw from the project, more than 50 percent of the landlords in a given area must agree on cancellation. The request is finalized when approved by Mayor Park.

If, however, a designated area wants to continue participating in the new town project, the city government will offer financial and administrative support to ensure it is carried out.

The new town project was initiated in 2002, when President Lee Myung-bak was the mayor of Seoul.

Park said that the number of “new towns” increased too much and too quickly as more people demanded construction projects in their areas and irresponsible politicians responded to the requests. A total of 401 additional areas in Seoul have been designated in the last five years, he said.

“We should stop running projects like this that demolish the homes of poor residents, leaving them without homes,” the mayor said.