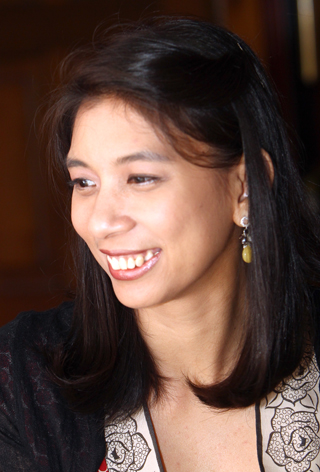 An unlikely friendship was struck between Representative Park Geun-hye, interim leader of the Grand National Party, and Jasmine Lee, a part-time actress and civil servant, earlier this month, leading to talks of a potential partnership between the two.

Jasmine Lee, a 35-year-old ethnic Filipina who is a Korean citizen and was married to a Korean man, recently came into the limelight playing the role of the titular character’s mother in the hit movie “Wandeuki” (2011) with the English title “Punch,” which is based on a novel of the same name by Kim Ryeo-ryeong. It is a coming-of-age story about a teenage delinquent, Wan-deuk, who is born to a disabled Korean father and a Filipina mother who abandons him, and the teacher who then guides him.

Park and Lee first met at an award ceremony for future female leaders on Jan. 6.

But the two women’s casual encounter may prove to run deeper. Lee appears to be a likely GNP representative candidate as the emergency council seeks to recruit talented individuals in an attempt to break away from its conservative image.

A GNP spokesperson revealed on Sunday that the emergency council is reviewing Lee’s qualifications as a potential candidate to represent migrant women and further stated, “It appears that Representative Park, who encountered Jasmine at the award ceremony and conversed with her, gained a good impression of her.”

As a Seoul city government official, Lee is currently working as the public relations team leader in the Foreign Residents Assistance Division.

In the Philippines, she originally attended medical school. After marrying a Korean sailor in 1995, she became a naturalized Korean citizen three years later.

Lee organized the first volunteer group for migrant women called the Waterdrop organization, and became a spokesperson for migrant women. Furthermore, she has worked in a variety of areas such as translating documentaries and appearing in movies and TV shows, along with giving lectures on Korea to foreigners.

Then she landed a role in the 2011 KBS year-end award winning movie “Punch,” which attracted 5.3 million viewers and became a box office hit.

Hence, the GNP sees Lee, who is living the “Korean dream,” as the kind of individual that fits the fresh, “moving figure” that Representative Park has recently been seeking.

On her Web site on Saturday, Park made an appeal, “Even if a new party is formed and the system appears good, if the person does not change, the same problems will occur again .?.?. Please introduce a person who can put effort and devotion into the progress of each region and each sector.”

She also wrote, “In a society where in twenty years one out of ten households will be multiethnic, there is far too little attention from the party on this issue.”

Meanwhile, Lee stated, “Policies may change my life, but if politics can change the policy, then it is very important who is in charge of the politics” and that she “wants to make a Republic of Korea where children of a migrant woman can play together with native Korean children without any constraints.”

Regarding possible future political aspirations she said, “Nothing has been decided yet.”

Her precautions stem from the scars she received from the June 2010 local elections. At that time, the GNP sought Lee as a potential candidate to run for office. But she was dropped from the final list of candidates. But nobody explained to her why she had been taken off the list.

At that time, she had been involved in local broadcasting, but news of her running for local office had a negative impact on her TV activities. Since then, she has worked as a civil servant for the Seoul Metropolitan Government under Mayor Park Won-soon.

Currently, Lee is the breadwinner for her two children, as her husband passed away in 2010 when he saved the life of his daughter from drowning during a family vacation.