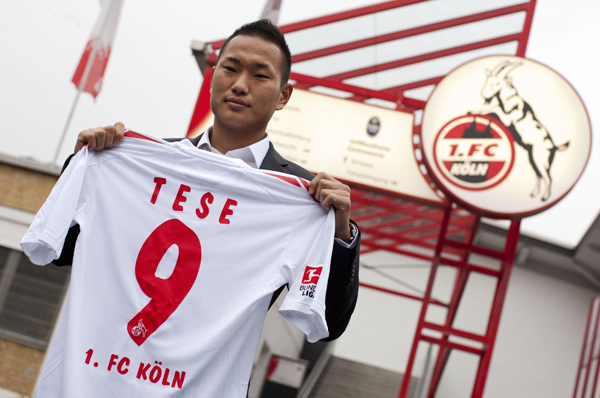 
North Korean striker Jong Tae-se has signed with the German Bundesliga’s FC Cologne from second-tier side VfL Bochum, the club announced on Monday.

Cologne, standing at 14th in the league table, didn’t disclose details of the signing of Jong, who goes by Chong Tese in Germany, but AFP reported the 27-year-old will cost the club around 500,000 euros ($660,000) for a five-month contract as well as the six months remaining on his contract with Bochum, citing Cologne managing director Volker Finke.

Finke, who coached the Japanese club Urawa Reds FC from 2009 to 2010, admitted he had been interested in the player for a long time.

“Chong Tese matches our requirement profile perfectly,” Finke told the club’s official Web site. “We observed this player for a long time and are fully convinced of his skills as a center forward.”

Jong is expected to fill in for the injured Lukas Podolski, who was reportedly ruled out for at least three weeks with a foot injury. The German international striker partially tore a tendon in his left foot during Saturday’s 4-1 league defeat at home to Schalke.

The striker, nicknamed “the People’s Rooney” - his playing style is similar to that of England striker Wayne Rooney - gained fame through the 2010 FIFA World Cup, although North Korea failed to earn a single point, scoring only one goal and conceding 12 in the competition. He has played 35 matches for North Korea.

Jong signed with VfL Bochum after the World Cup and has so far netted 14 goals and tallied 5 assists in 39 matches in Germany’s second division.

Jong, who will be wearing the number nine with Cologne, will now face South Koreans in future league games. Currently Son Heung-min of Hamburg SV and Koo Ja-cheol of VfL Wolfsburg are playing in the German Bundesliga.