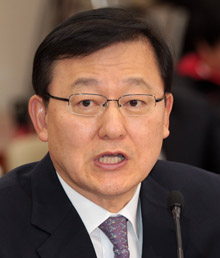 Knowledge Economy Minister Hong Suk-woo publicly opposed the idea of reviving a restriction that would limit excessive inter-affiliate investments at large conglomerates yesterday, an issue that has recently come to prominence. He said political camps were only talking of reviving the rule to appeal to populist sentiment.

“[The rule] could hinder business activities and is not desirable,” Hong said. “It was right that the rule was abolished .?.?. The recent discussion is not a result of analytic consideration of policies, but stems from populism.”

The government introduced the rule that restricts inter-affiliate investments in 1986 to prevent conglomerates from growing excessively. Although the threshold has changed periodically, as of 2001, conglomerates were barred from owning a stake in any of their affiliates worth more than 25 percent of the group’s net assets. The rule was abolished in 2009.

Finance Minister Bahk Jae-wan made similar comments after the Democratic United Party began attempting to revive the restriction. “Political parties have been coming up with various measures against large conglomerates,” he said. “But we need to be cautious about excessively attacking the ‘haves’ and the powerful,” Bahk told the press on Monday.

Bahk also publicly opposed the idea of introducing the so-called “conglomerate tax” currently being pursued by opposition party lawmakers, saying that it would undermine the global competitiveness of Korean companies and discourage foreign direct investment.

The Democratic United Party has outlined numerous plans recently to fight growing economic gaps in the country, including between small and large businesses.

“It is not desirable for large conglomerates to cause social problems,” Hong said. “I hope that they can act wisely to achieve shared growth.”

Separately, Hong said the ministry’s move to cut electricity consumption at large buildings and factories by 10 percent has been successful.