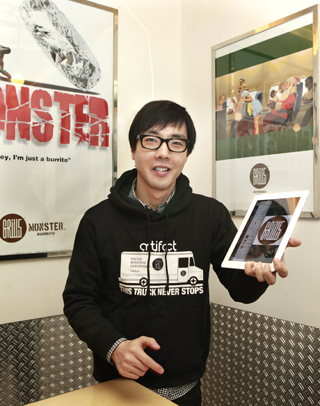 Kim Hyun-chul, owner of Grill5taco, poses inside his shop. By Park Sang-moon

Leaping from debt to success in less than a year, Kim Hyun-chul, owner of fusion taco restaurant Grill5taco, attributes the overnight popularity of his business to marketing via social networking services (SNS) - Twitter in particular.

Kim reflected on the beginnings of his taco business, when in 2009 he was in debt from a previous business failure and started operating a single taco truck in southern Seoul. But by connecting with customers online, his business went viral.

In a one-on-one interview with the Korea JoongAng Daily, Kim revealed the secrets behind his SNS success and the missteps he took along the way.

Q. You are one of the most frequently mentioned success stories of effective marketing via SNS for small- and medium-sized businesses in Korea. But before all the success, were there any mistakes?

A. Marketing through social media is a tricky thing. There are many risks involved but early on, I just didn’t know. One time, a foreign reporter came into the restaurant and then wrote a bad review of the place, saying that my tacos were disgusting. Her main complaint was that we included pickles inside the tacos. The thing is, Grill5taco is a fusion, Korean-style taco joint. If you don’t want the pickles, ask the employees to leave it out! Anyway, I shouldn’t have done this but after I saw the review, I tweeted that her face was disgusting as well. I deleted it right away, but many people saw the tweet. I really regret that tweet.

What was the highest number of tweets you got in a single day?

On Christmas Day last year, I tweeted about a special Christmas promotion at Grill5taco, saying that if people retweeted my tweets or followed Grill5taco on Twitter, they would receive a coupon.

What are the best and worst things about using SNS to promote your business?

The best thing is that it’s quick and free. If used properly, SNS marketing can be the best way to hear what your customers really want from you in minutes. It’s also fun and interactive and you feel as though you are connecting to people whom without SNS, you would never have met or talked to. It’s hassle-free, it doesn’t require a big group of market analysts and the owner can be more involved in day-to-day business.

However, there are huge risks when you promote a business through social media. I am just starting to realize them. Basically, you are putting the face of your brand out there every time you tweet under the name of your brand. Because it’s so quick, your brand image can go down in a matter of hours. It’s scary to think about that.