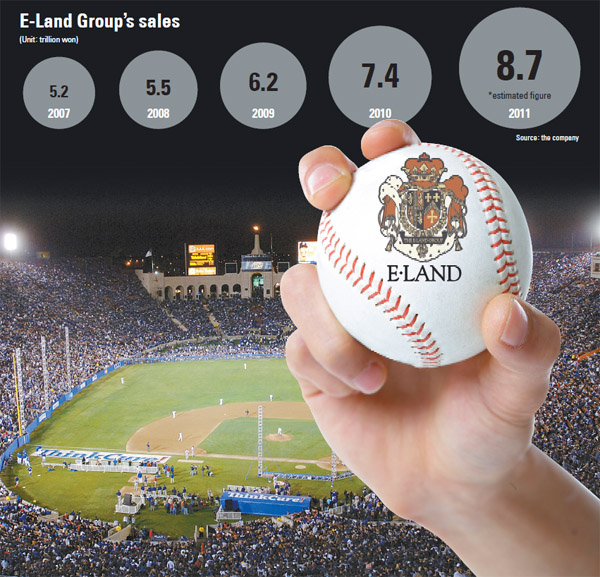 The Dodgers have been one of Korean baseball fans’ favorite teams since Park Chan-ho, the country’s first Major Leaguer, spent seven years there from 1994 to 2001. Los Angeles is also home to one of the largest Koreatowns in the U.S.

E-Land officials confirmed to the Korea JoongAng Daily yesterday that the group has formed a consortium with an investor to participate in the bid, but refused to provide further details.

“We are currently participating in the bid,” said an official at E-Land, who asked not to be named, citing the sensitivity of the issue.

However, industry observers who are familiar with the bid claim that former Los Angeles Dodgers owner Peter O’Malley is also involved in the consortium and that E-Land is considering investing $100 million in the deal.

“E-Land has formed a consortium, and this has been short-listed among the final bidders,” an industry source said.

The Los Angeles Times reported early last week that the final bidding price could be above $1.5 billion, which would be a new record for an MLB outfit. The Dodgers filed for bankruptcy protection in June 2011, and the team is expected to announce a preferred bidder in the first week of April.

Others see much promise in the venture if it bears fruit as it could help the Korean fashion retailer penetrate bigger markets such as the United States and China.

“If E-Land becomes [one of the new] owners of the Dodgers, it would boost the profile of its brands in the U.S. market, such as Who.A.U and E-Land Kids,” said an industry source. “More U.S. customers would become familiar with E-Land because it will undoubtedly roll out a range of Dodgers accessories, ranging from baseball caps to jackets.”

The company entered the U.S. market in November 2007 and opened its first high-profile Who.A.U store in Manhattan two and a half years later. The brand mostly targets teenagers with its casual, California-style sportswear, which some critics see as a de facto clone of Abercrombie & Fitch’s Hollister lifestyle brand.

According to Reuters, the preliminary round of bidding for the Dodgers has been completed and an estimated 12 parties lodged nonbinding first-round bids for the team. Bidders include billionaire hedge fund manager Steve Cohen, ex-Yankees and Dodgers manager Joe Torre, and basketball great Magic Johnson, according to the newswire.

E-Land Group began life as a small apparel shop called “England” that siblings Park Sung-soo and Park Sung-gyung established in front of Seoul’s Ewha Womans University in 1980. It has since grown into a colossal enterprise with 27 affiliates by aggressively pushing for a series of merger and acquisition deals in the fashion, construction, restaurant and leisure sectors since the early 2000s.

The group raised 8.7 trillion won ($7.7 billion) in sales last year, up 41 percent from 5.2 trillion won in 2007. The unlisted retail group runs apparel brands including New Balance, Teenie Weenie and Eblin, as well as the Ashley restaurant brand. It also launched the fast-fashion brand SPAO in partnership with Korea’s largest entertainment agency, SM, in a bid to challenge brands like Zara and Uniqlo.

E-Land also made headlines last December by buying a 33-carat diamond once owned by Hollywood star Elizabeth Taylor to display at its amusement park. The stone was auctioned for more than $8.8 million in New York, indicating the vast wealth at its disposal.

However, it is China that has become E-Land’s principal cash cow after the group entered the neighboring country’s fashion market in 1996. E-Land is now lauded as one of the most successful Korean enterprises in the region, operating 5,000 outlets in China, where it ranks as the No. 2 player in the women’s apparel market.

“E-Land’s fashion sector raised 1.6 trillion won in sales in China alone in 2011, where it is seeing annual average growth of 67 percent,” said the E-Land official.

As it only raised an additional 100 billion won on its home turf in the same segment last year, “we expect it will just be a matter of time before its overseas sales overtake those in the domestic market,” he added.

In 2011, the fashion retailer acquired knitwear brand Lochcarron of Scotland as well as Italian brand Mandarina Duck, which specializes in designer luggage and travel accessories.

E-Land is also expanding its business portfolio to include resorts and construction companies. Industry sources said it acquired two major resorts in the tropical Pacific island of Saipan last month, the Pacific Islands Club Saipan and Palms Resort Saipan. The reports said it will start running at least one of the resorts from next month, but E-Land has not made an official announcement yet.

The company is also participating in a bid to acquire Ssangyong Construction, which analysts estimate would be worth around 200 billion won.

E-Land officials said the company will continue to diversify.

“Chairman Park Sung-soo has told employees the leisure business will become a key growth engine,” said another E-Land official. “We will continue to seek M&As in overseas markets.”