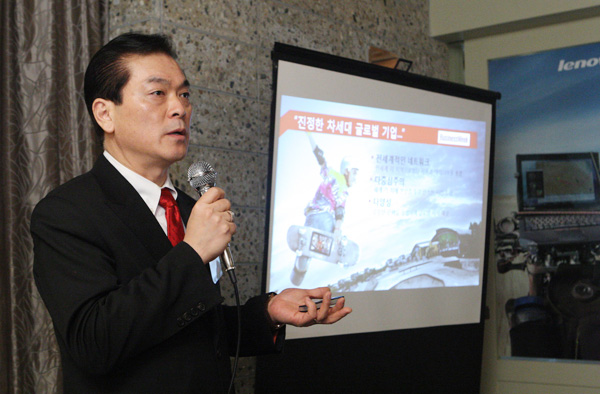 Park Chi-man, the country general manager of Lenovo Korea, explains the company’s plans for 2012 to reporters at a press conference yesterday in Seoul. Provided by the company

The prevailing sentiment in the global industry for personal computers is that they are no longer profitable, a trend that looks unlikely to be reversed this year as consumers continue to tighten their purse strings amid an anticipated economic contraction.

In fact, technology market research groups Gartner and IDC have all cut their growth forecasts for the market in coming years. Gartner claims the world market edged up a mere 1 percent last year, compared to growth of 13.8 percent in 2010, due mainly to financial instability and dampened consumer sentiment in advanced countries like the U.S. and in Europe.

But a Chinese PC maker Lenovo, which acquired IBM’s PC business in 2005, has refused to accept the grim outlook and is hoping to make inroads in the Korean market.

Although hardly a household name in the country, Lenovo ranked as the world’s second-biggest manufacturer of personal computers in the second quarter of fiscal 2011, according to statistics supplied by the company, which would have seen it overtake Acer and trail only Hewlett-Packard.

The name Lenovo is a combination of the words “legend” and “innovation,” and the company has certainly been recognized for the latter.

At the Consumer Electronics Show in Las Vegas last month, it received no fewer than 16 awards and honors. Notably, its IdeaPad Yoga, an ultrabook-tablet hybrid, won nine awards from such prestigious publications as PC Magazine. Whereas the company created its ThinkPad brand more with corporate and professional consumers in mind, the IdeaPad brand represents an attempt to reforge relations with the public in general.

“We continue to set the bar in the PC industry with our dedication to innovation, outstanding engineering and design elements, and the awards we brought home at CES validate that we’re on the cutting edge of PC technology,” said Peter Hortensius, senior vice president and president of Lenovo’s product group.

Lenovo is a relatively young entity. It traces its origins to the Chinese PC firm Legend, which was founded in 1984. But it was not until 2005, when it acquired IBM’s PC business, that it was reborn as a multinational PC maker under a new name.

The company has recorded furious growth in the last several years, according to Park Chi-man, the country general manager of Lenovo Korea, who met reporters yesterday to share the company’s plans for this year.

“It has been recording the fastest growth among global PC makers for the past eight quarters,” he said, adding that this roaring momentum has at times seen it outpace the industry average by seven times.

Lenovo may be a rising star globally, but this is hardly the case in Korea, where Samsung Electronics and LG Electronics dominate more than half of the PC market.

According to Gartner, Lenovo only controlled 3.9 percent of Korea’s PC market in the third quarter of 2011, trailing Samsung, LG, HP and Apple.

Park, who has worked at Samsung Electronics, U.S. chipmaker AMD and Dell, acknowledged the company’s low level of brand recognition in Korea.

“When I first joined Lenovo four years ago, I saw how little presence the company had in Korea. Also, there was a sense of prejudice against Chinese companies [and goods],” he said.

“But thankfully, their ThinkPad had a huge presence. .?.?. And over the years, even though it may not be that impressive, we have made progress in terms of expanding our market share.”

Lenovo officials said such expansion was possible as Lenovo began marketing IdeaPad, a series of consumer-friendly laptops, in Korea in 2009, shifting away from its previous strategy that focused solely on marketing the ThinkPad for commercial market segments like corporations, governments and schools.

Asked about the importance of the Korean market to a firm that has such a strong foothold in China, where it derives about 40 percent of its sales, Park said Korea is valuable in a number of ways.

“In Korea there are so many early adopters, which is not yet the case in China,” he said. “Also, our key markets in Asia are Korea, Taiwan and Hong Kong. Korea’s PC market is twice the size of Taiwan’s and four times the size of Hong Kong’s.”

Officials say Lenovo has yet to decide which of the products it displayed at the Las Vegas show will be rolled out in Korea this year, but it will continue to put more of a focus on individual consumers.