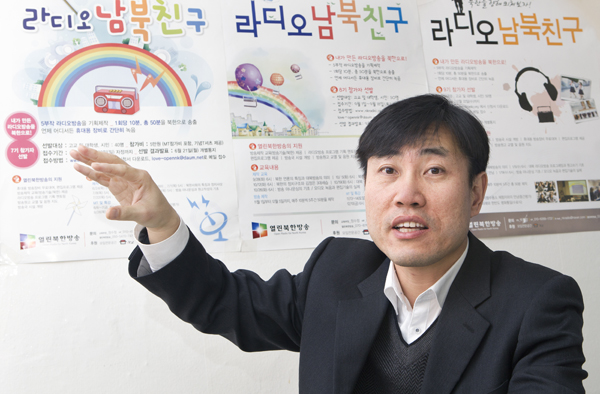 South Korea’s pro-North politicians and liberal activists who fought for democratization in the 1980s are too quiet on human rights issues in the North, said Ha Tae-keung, president of Open Radio for North Korea.

“However, if North Korea heeds the demand of international communities for protecting human rights of its people and releases many political criminals from its gulags, it would be a catalyst to improve not only North-U.S. relations but inter-Korean relations as well,” he said.

The 44-year-old Ha was once among many pro-North student activists during the nationwide democratization movement in the 1980s, studying North Korea’s juche (self-reliance) ideology. He was also a friend of Lee Jung-hee, who currently leads the minor liberal Unified Progressive Party, when he attended Seoul National University.

“In the 1980s, many pro-North activists from South Korea believed that North Korea’s democracy was more developed than the South’s, because the founder Kim Il Sung earned strong support from his people at the time,” he said.

However, starting from the mid-1990s, an increasing number of North Korean defectors had witnessed the reality of North Korea’s human rights issues, dispelling many false beliefs about the North among South Korean students.

Ha said he wanted to confirm those allegations that many North Koran people were dying of hunger and torture. So he left for China in 1999 and met with North Korean defectors at border areas.

“I learned about the reality of North Korea’s human rights violations through meetings with lots of defectors,” he said. “The most shocking story that I heard from them was about a son who was executed by firing squad in front of his mother, and the authorities even ordered the mother to condemn her son to his face.”

“The way of threatening people in North Korea was beyond my imagination. It was so unforgivable, unacceptable and inhumane,” he said.

Many liberal activists didn’t know about it at all, Ha said, until a series of North Korean defectors to the South revealed the truth to the public.

“We lacked information,” he said. “Many expected that the North would respect its people’s rights more than the South Korean government did, because at the time, we were suffering from a dictatorship in the 1980s. If they knew about the North earlier, there wouldn’t have been so many students following North Korea.”

Asked why pro-North activists backed the regime even after they observed the dictatorship of Stalin and the collapse of the Soviet Union, Ha briefly responded, “They believed North Korea would be different.”

Now, discussing the human rights of North Koreans has become a political issue in the South. Many conservatives strongly condemn human rights abuses in the North, therefore Ha was deemed a traitor to his side among left-wing activists after he decided to become a fighter for North Korea’s human rights.

“I think many left-wing activists believe they would ‘lose’ in a political game with conservatives if they talk about North Korea’s human rights issues because it means they agree with the conservatives,” he said.

Ha said that Communists in the United States and Europe were also conflicted in the 1960s over human rights violations in the Soviet Union. But many argued that they couldn’t keep silent on the human rights issue, even though they were Communists.

“In a sense, Marxism is based on humanism, but the silence of left-wing activists is wrong,” Ha said. “The spirit of the left has gone, and they have become ordinary politicians.”

Asked what he thinks about the criticism that he has changed his political track, he said, “I’ve always struggled for Korean democracy. I haven’t ever abandoned my beliefs.”

After he came back from China, he decided to found a private radio station to educate North Korean people about their reality and show them the outside world. At the time, there was only one broadcast station, the state-run KBS, that aired radio programs for the North.

In 2005, he flew to the United States and persuaded U.S. government officials and members of Congress to fund his radio station for six months. Finally, the U.S. Congress decided to support him.

Currently, about 80 percent of the budget for his radio station comes from the U.S. Department of State, some American NGOs and Reporters Without Borders. The rest of the money comes from donations by South Korean citizens and funds from the South Korean government.

Most of the programs do not broadcast propaganda promoting South Korea or the outside world but rather teach classes in democracy and foreign languages or send letters from North Korean defectors to families in their homeland. The programs are broadcast for five hours every day.

Ha also pointed out that the pro-North movement is linked with anti-U.S. sentiment for left-wing activists because they believe the United States aggravated the separation of the two Koreas.

“Although pro-North sentiment is diminishing among liberal activists, the anti-U.S. sentiment is still pervasive,” Ha said. “They don’t like U.S. capitalism, the Iraq War or the Korea-U.S. free trade agreement. They think South Korea is kind of a colony of the United States. They oppose whatever the U.S. government does.”