Seoul told to hush up before summit

Seoul told to hush up before summit 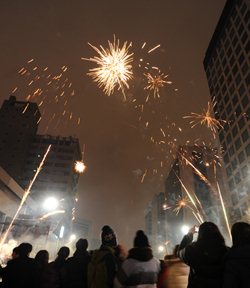 Fireworks will be banned and shooting ranges will be closed in Seoul for four days in March as precautionary security measures for the upcoming Nuclear Security Summit, police said yesterday.

Korea will host the March 26-27 summit with top leaders from about 50 nations and international organizations set to attend. The main goal of the Seoul summit, the second such meeting following one in the United States in 2010, is aimed at preventing nuclear terrorism. Starting on March 24, police said they will ban civilian uses of explosive materials, such as industrial explosives and fireworks, in Seoul for four days.

In Korea, guns are heavily regulated and the country has one of the lowest rates of gun crime in the world.

Seoul officials said one of the key topics at the Seoul summit would be how to protect vulnerable radioactive materials worldwide so terrorists could not use them to make a crude nuclear bomb.

Other key items to be discussed in Seoul will include “practical and concrete” ways to prevent the threat of nuclear terrorism and ensure the safety of atomic energy, they said.