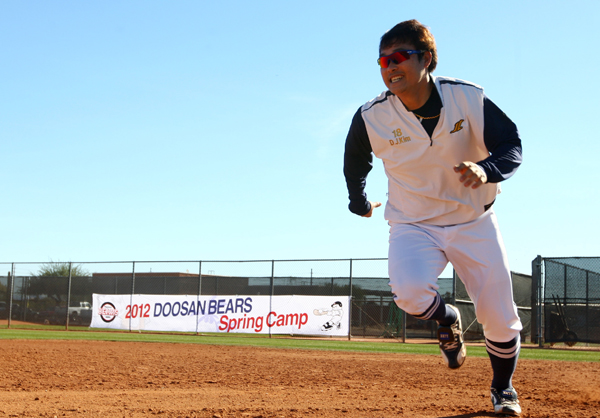 
Seoul Doosan Bears slugger Kim Dong-joo is the only remaining player on the team to have experienced the ball club’s last Korean Series title in 2001. The 36-year-old third baseman has a championship ring from his time under former manager Kim In-sik.

During this past offseason, Kim was the last of 17 free agents to ink a deal. He had some disputes with the club early on in the negotiating process, but eventually signed a three-year deal worth 700 million won ($605,000) in salary and 500 million won in signing bonus, including 200 million won in incentives.

With the renewed contract, Kim is likely to remain a Bear until the end of his career. He can now concentrate on the upcoming season with new manager Kim Jin-wook.

Since his debut in 1998, when the team was called the OB Bears, Kim has become one of the premier sluggers in Korean baseball. The two-time Golden Glove winner has a career batting average of .310 with 270 home runs and 1,061 RBI. He also helped Korea win gold medals at the Olympics in 2008 and Asian Games in 1998 and 2002.

Kim has enjoyed six seasons with over 20 home runs, but the oft-injured infielder has never played a full season in his career. In fact, last year, he batted .286 and hit 17 homers, both his worst numbers since 2006.

For Kim, there could be pressure on his performance for the upcoming season, but the 2003 batting average champion said he will not only look out for himself. In an interview with Ilgan Sports, the JoongAng Ilbo’s daily sports newspaper, Kim, who is currently at the Bears’ spring training camp in Arizona, said as a veteran in his 15th year in the Korea Baseball Organization, he will focus on what really matters at this point in his career - doing what veterans have to do.

Q.How’s your condition these days?

A.Manager Kim Jin-wook jokes that I should slow it down when he sees me training [laughs]. It’s just the beginning, but I feel very good. I even have to control my pace. I feel no sickness and my physique is great.

What do you think about manager Kim’s leadership so far?

I think he is similar to former manager Kim In-sik. He communicates easily with players and inspires players. He doesn’t put on pressure but gets players motivated. The Bears haven’t won the championship and have suffered in difficult situations, but Kim is moving the team so that we can stand up again.

Your nick name “Papa Bear” seems to give off the image that you are a fearful veteran for the young players. What are your thoughts?

I found out that the age gap between the youngest player and me is 18 years. They have a rough appearance, but to me they all look like baby bears. Whenever I get older, I just turn my eyes to the young players. Recently, Choi Joon-suk asked me to give him a massage and I just did it diligently. You know, the club gets better when young players grow healthy.

As a veteran who has played for 15 years in the league, how do you feel about this team?

I have a responsibility. I’m the only franchise player in the club to have experienced a championship title. I want to pass that joy and moving story on to our young players. I think that is the last thing that I can do for this club.

How would you describe the 2011 season?

I had a lot of pressure to win the championship title. I think the championship trophy is made in heaven. It doesn’t matter whether you have spectacular talent. I found out the championship ring is further out of reach when you get greedy. I still have a big desire for another ring, but I won’t get stressed. When you try your best, the results will follow.

You insist on playing third base again this upcoming season. Is that still a firm goal of yours?

Yes. I know I have not played full time as a third base defenseman, but I have been training steadily. I am ready physically, but I will not try to get too greedy about it.

What do you mean when you say you are not trying to get greedy?

Instead of insisting on a certain position, I want to make a choice that will be beneficial to the club. When I was young, I played even though I had injuries.

But if I try to play a full season as a third baseman right now, it could backfire on our team. When I’m not fit, I will do my job as a designated hitter. I will talk with my manger to figure this out.

What kind of player do you want to be remembered by teammates as?


When I quit baseball, I just want to be remembered by young players that I was a player with loyalty and had warm affection toward them. I can put up good numbers if I only think about me, but baseball gets better when the entire team works as one unit and that will lead to a championship title.