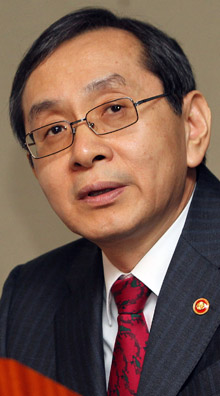 The head of Korea’s corporate watchdog expressed opposition yesterday to a move by lawmakers to revive a ceiling on equity investment by family-controlled conglomerates, describing it as an outdated “analog method” that runs counter to global management trends.

The remarks by Fair Trade Commission (FTC) Chairman Kim Dong-soo come as political circles are considering reinstating the equity investment ceiling that was designed to restrict conglomerates from investing in other companies in excess of a certain percentage of their net asset worth.

The ceiling was first introduced in 1987 in order to prevent reckless business expansion by chaebol. The restraint was scrapped in March 2009 as the business-friendly government saw it as a regulation that hampered free corporate investment.

“The equity investment ceiling system is an analog method that does not reflect the global management environment and the traits of individual companies,” Kim said at a meeting with business leaders in Seoul.

“It is a natural economic phenomenon to see a company’s size, and the number of businesses that it is involved in, expand when the economy grows. We need to diagnose the root cause of problems with conglomerates and come up with the right prescription rather than [talking about] the size of businesses,” he said.

He added that decisions related to investment or business diversification should be made by the conglomerates themselves, which have to compete not just with domestic companies but also powerful foreign rivals.

His remarks come as lawmakers are seeking tougher regulations on chaebol in order to crack down on their unfair business practices and prevent excessive wealth concentration among a tiny number of large conglomerates.

Many policy makers, however, express opposition to what they view as “corporate bashing,” saying that it could end up dampening business investment and hiring at a time when the nation faces cloudy economic conditions at home and abroad.

They also criticized political circles for pushing for such a move in order to win broader public support ahead of the April general elections.

On Tuesday, Minister of Knowledge Economy Hong Suk-woo said that it would be a “populist” move to even consider reviving the equity investment ceiling, which was abolished less than three years ago with approval from the ruling party. Yonhap