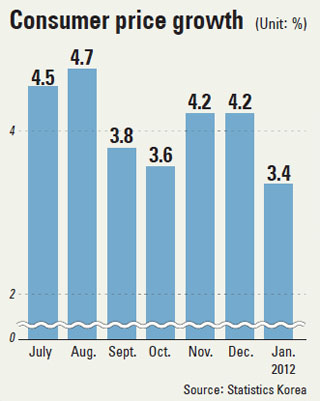 Consumer prices grew at a slower pace in January as the government pushed to fight inflation amid concerns that high prices could hurt consumption and overall economic recovery, a government report showed yesterday.

According to the report by Statistics Korea, the country’s consumer price index rose 3.4 percent in January from a year earlier, slowing from a 4.2 percent gain in December.

It gained 0.5 percent from the previous month.

Core inflation, which excludes volatile oil and food costs, grew 3.2 percent from a year earlier, which also decelerated from 3.6 percent growth reported for the previous month.

The government has been struggling to tame inflation, which was driven mostly by rising crude oil, raw material and food prices.

For 2011, the nation’s consumer prices jumped 4 percent from a year earlier, hitting the upper ceiling of the Bank of Korea’s target band of 2 percent to 4 percent.

Inflation exerts a negative influence on the economy as high prices can cause consumers to be reluctant to spend.

The government expects things will improve this year and that consumer prices will grow 3.2 percent. But farming and factory product prices still remain a drag on the government’s efforts.

Prices of agricultural, livestock and fishery products jumped 3.6 percent on-year in January, while those of factory goods rose 4.3 percent due to higher energy costs, the report showed.

The fresh food price index that includes vegetables and fruits also rose 6.2 percent in January from a month earlier, though it dropped 2.5 percent from the same month a year earlier.

Taming inflation is one of the top priorities for policy makers.

Earlier this year, the central bank said that its monetary policy goal this year will be to focus on maintaining price stability.