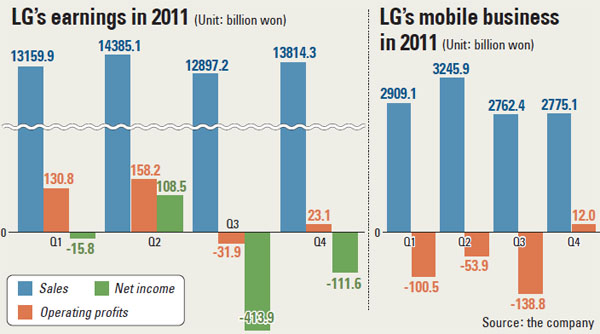 LG Electronics, the Korean technology giant that has sailed through several choppy quarters, narrowed its net loss in the final three months of 2011, buoyed by robust TV sales over the holiday season and a mobile business that managed to turn a profit after losing money for almost two years.

The company, the world’s second-largest manufacturer of flatscreen TVs and the third-biggest maker of mobile phones, said in a regulatory filing yesterday that its net loss amounted to 111.6 billion won ($99 million) in the October to December period, compared to a loss of 256.4 billion won in the same quarter in 2010.

The company recorded sales of 13.8 trillion won in the most recently ended quarter, down 6.01 percent from the year before, yet it still managed to post an operating profit of 23.1 billion won. In the corresponding period one year earlier, its higher sales did nothing to stop it posting an operating loss of 245.7 billion won.

“A seasonal increase in TV sales and record revenues from the home appliance division raised the company’s bottom line,” LG Electronics said. “Our handset operations swung into positive territory for the first time in seven quarters.”

The company’s late response to the smartphone boom also caused it to post record operating losses in the second half of 2010, and it has been struggling ever since. But LG has been seeking a way out of the quagmire by pumping out new devices that work on the high-speed fourth-generation (4G) wireless market.

It unveiled the Optimus LTE smartphone on Oct. 10 in Korea, which works on the 4G technology called Long Term Evolution (LTE).

“As LG Electronics is shifting its focus to high-end smartphones by scaling back on regular cell phones, the company’s earnings outlooks remain rosy for the first quarter,” said Dori Kim, an analyst at Solomon Investment and Securities.

“The handset business will continue improving,” Chun Sung Hoon, at Hana Daetoo Securities told Bloomberg. “With everyone using the same software platform, the competition comes down to hardware competitiveness, in which LG is strong.”

Additionally, the company’s home entertainment division, which makes televisions, posted an operating profit of 149.7 billion won in the fourth quarter thanks to brisk sales of 3-D TVs and other premium sets. It also sold a record 8.8 million flatscreen TVs in the quarter, helping it overcome an operating loss of 65.2 billion won posted one year earlier.

The company plans to invest over half of its 4.2 trillion won budget this year in research and development, it said.