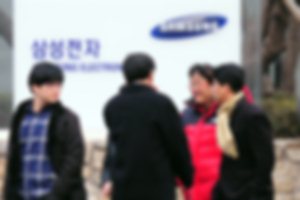 But the glow didn’t last long. The company got bad news this week that could negatively affect its legal battle against archrival Apple, causing its stock to dive under the 1.1 million won ($987) level.

The European Commission announced Tuesday that it has launched an investigation into whether Samsung is using lawsuits over key patents on third-generation wireless technology to unfairly restrain competition. If Samsung is found guilty, it could be fined up to 10 percent of its annual global revenues.

Samsung and Apple, the world’s two largest smartphone vendors, have been locked in numerous patent lawsuits since last April, vying for dominance in the lucrative market. While Apple alleges Samsung infringed on its design patents, Samsung says Apple infringed on its 3G mobile patents.

“The Commission will investigate, in particular, whether [.?.?.] Samsung has failed to honor its irrevocable commitment given in 1998 to the European Telecommunications Standards,” the EU spokesman said.

Under EU patent rules, a company that holds patents for standardized products must license them out indiscriminately at a fair price. And Samsung pledged do so in 1998.

Samsung tried to play down the news, with an official saying, “There will be no problem because we have always tried to be fair and helpful to the industry when we execute our rights to patents for standardized products.”

He added, “We will continue to try get our rights recognized in a fair manner in the ongoing legal battle [against Apple.]”

Still, analysts say the move by the European Commission - which is the antitrust enforcer for the EU - will put Samsung in a disadvantageous position.

Samsung has been extremely proud of its wide portfolio of wireless patents, with some officials saying, “No one can make cell phones without stepping into our ‘territory.’?”

But the strength of those patents may have boomeranged, making the company vulnerable to attacks from rivals.

“The launch of a full-blown investigation after a few months of preliminary investigations is an important step,” said Florian Mueller, a patent analyst. “Samsung now has to think carefully about how it wants to deal with [the probe].”

Another industry analyst said, “The Commission has enforced strong restrictions and imposed hefty fines on companies like Microsoft and Intel. Should Samsung be found guilty, it will not only lose leverage in the legal battle, but also experience significant financial losses.”

As a result Samsung Electronics slipped 2.53 percent to 1,079,000 won at the market’s close yesterday.

Also Tuesday, an appeals court in Germany ruled in favor of Apple, saying Samsung could not sell its Galaxy Tab 10.1 nor the Galaxy Tab 8.9 in the country.