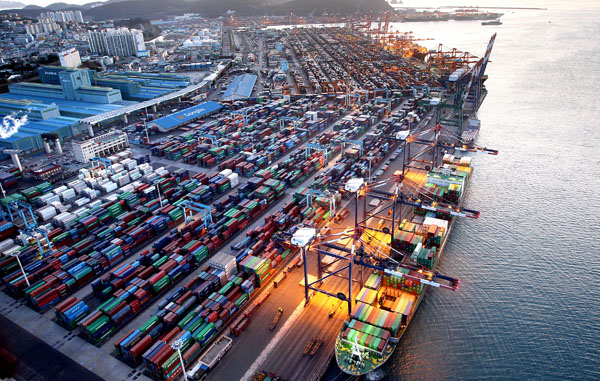 The sputtering global economy coupled with the European financial crisis took a toll on Korea’s trade balance in January, which went into the red for the first time in two years.

A potential trade deficit in January was largely anticipated, but the amount was much bigger than expected.

Korea posted a trade deficit of $1.96 billion in January, a sharp turnaround from a surplus of $2.48 billion a year earlier, the Ministry of Knowledge Economy said. It has been 24 months since Korea had a trade deficit in January 2010.

Last month also marked the first time in 27 months that the country’s exports shrank on a year-on-year basis.

Minister of Knowledge Economy Hong Suk-woo warned in a report to President Lee Myung-bak in January that Korea may post a trade deficit that month, but the amount was larger than expected.

The economic slump in Europe had critical effects on Korea’s exports. “Exports to the EU fell by almost half,” Han Jin-hyun, deputy minister for trade and investment policy of at the ministry, told the press at the Government Complex in Gwacheon, Gyeonggi.

“Ship exports were the hardest hit, and it was a significant amount in value,” Han said. “Exports of flat-panel displays and mobile handsets also decreased a lot.”

Exports to Europe plunged 44.8 percent on-year in January due to the continuing fiscal and debt crisis on the continent, and ship exports, in particular, sank 78.8 percent. Shipping companies in Europe have delayed or even canceled ship deliveries due to difficulties in financing and declining shipping charges.

Ship exports to Europe are likely to stay stagnant as it takes two to three years to build a ship. Ship orders plunged in 2008 and 2009 due to the global financial crisis, and orders received during that period are now being delivered. Ship orders significantly affect the country’s trade balance because each unit can cost several hundred million dollars or even billons. Europe is the home of many large shipping companies.

Exports to other regions, however, fared well. Exports to Japan increased 37.2 percent, while exports to the Association of Southeast Asian Nations, or Asean, the United States and China rose 22.3 percent, 23.3 percent and 7.3 percent, respectively.

The increase in exports to Japan is particularly notable as Korea has posted a chronic deficit with the neighboring country. Exports of mobile handsets, steel and machinery jumped 48.2 percent, 38.1 percent and 34.4 percent, respectively. Delivery of petroleum products to Japan also climbed 14.1 percent in January.

The ministry partly attributed the deficit last month to seasonal factors. In fact, Korea recorded trade deficits in the month of January in 2008, 2009 and 2010. Imports of crude oil also grew in value, although the amount dropped as uncertainty in the Middle East, including international sanctions against Iran, led to a higher oil price of $112.80 per barrel last month compared to $91 in January 2011.

The number of working days fell in January compared to a year before because of the Lunar New Year holiday.

Deputy Minister Han, however, was optimistic.

“Exports will turn up this month, and the trade balance will improve,” Han said. “The Chinese economy is expected to have a soft landing, and the financial crisis in Europe is less likely to worsen. The situation will be better in the second half of this year than in the first half.

“The amount of daily exports is on the rise and is higher than a year ago,” Han said. “It is somewhat worrisome, but I don’t think the situation is critical.”

The ministry anticipates the country’s trade surplus will shrink from $32.1 billion last year to $25 billion this year on estimated exports of $595 billion and imports of $570 billion.

“Korea’s trade balance is going to improve because economic indicators in the U.S. have recently improved, while China is also moving away from belt-tightening policies,” said a senior economist at Shinhan Investment.

There are also pessimistic views that a worsening situation in emerging markets is likely to negatively affect the country’s exports.