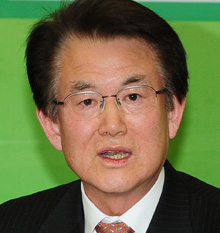 The Democratic United Party chose Kang Chul-kyu, Woosuk University president and a liberal economist who has long advocated reform of the chaebol, to oversee its nomination process for the April 11 legislative elections.

DUP Chairwoman Han Myeong-sook yesterday announced Kang’s appointment at a leadership meeting. “He is a man of integrity and transparency,” Han said. “He has preserved his principles consistently.”

A native of Gongju, South Chungcheong, Kang studied economics at Seoul National University. A founding member of the Citizens’ Coalition for Economic Justice, one of the major civic groups in Korea, Kang has led campaigns to reform the ownership structure and business practices of conglomerates and to fight corruption.

He served as the head of the Anti-Corruption Commission under the Kim Dae-jung administration and headed the Fair Trade Commission for three years in the Roh Moo-hyun government. Until recently, Kang worked as a co-head of the Citizens’ Coalition of Economic Justice.

“With various and seasoned administrative experiences, academic specialties and devotion to civic activities, he is the best person to lead the DUP’s nomination reform,” Han said.

The appointment was announced only a day after the conservative ruling Grand National Party unveiled its 11-member nomination recommendation committee led by Jung Hong-won, a former prosecutor, as a part of its self-reform measures. Although the DUP hurried yesterday to announce Kang as its nomination committee chairman, it has yet to announce other members on the committee.

With a clear intention to disparage the GNP’s choice, DUP spokesman Shin Kyoung-min said no former prosecutors were considered as the nomination committee head. “Although talented ex-prosecutors were recommended, the party did not trust them,” Shin said.

The party still has a long way to complete the nomination preparation before the April 11 general election. It plans to finalize the process by mid-March, but it still needs to complete a nomination review committee and come up with criteria to choose candidates.

Kang yesterday made clear he wanted to reform the process of choosing candidates. “I didn’t come here to run errands for others,” he said. “I will work on it with my philosophy, conviction and principles.”

Kang said his key criteria for candidates were their ability to respect others, to understand the majority’s hardships, to seek systemic solutions and to contribute in building a fair society.