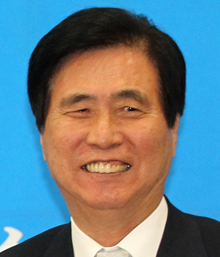 In a sensitive election year, President Lee Myung-bak yesterday nominated a veteran lawmaker from the ruling party with three decades of media experience as his special minister to handle political affairs.

According to the Blue House, Ko Heung-kil, a three-term representative of the Grand National Party and former journalist at the JoongAng Ilbo, was tasked with handling special political missions. If the 67-year-old politician passes the National Assembly’s confirmation hearing, he will fill a post that has been vacant since Lee Jae-oh stepped down in September of last year.

With the nomination, Ko, who won three elections since 2000 in representing the Bundang A District of Gyeonggi, will naturally give up seeking reelection in April.

“Ko has a pragmatic and gentle personality,” Park Jeong-ha, presidential spokesman, said yesterday. “His strong views and expertise in pending issues are highly valued. With his wide network and seasoned experience as a journalist and politician, Ko is expected to effectively perform tasks from the president and the prime minister and serve as a communication channel between the National Assembly and the administration.”

A native of Seoul, Ko studied political science at Seoul National University. He worked at the JoongAng Ilbo from 1968 till 1997 and joined politics to serve as a special advisor to Lee Hoi-chang, then chairman of the New Korea Party, the predecessor of the GNP.

He served as the GNP’s key public relations officer and won his first legislative election in 2000. During his three terms in the National Assembly, Ko mainly worked on media-related policies. From 2008 to 2010, Ko served as head of the National Assembly’s Committee on Culture, Sports, Tourism, Broadcasting and Communication, leading efforts to pass media bills that cleared a path for newspaper companies and conglomerates to enter the country’s broadcasting business. It remains to be seen if Ko will be able to smoothly pass the confirmation hearing.