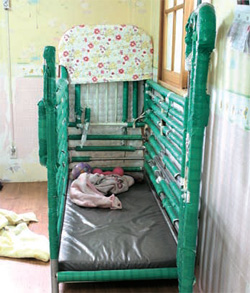 A director of a nursing home for the disabled locked his patients in small cells and allowed employees to physically assault them, the state-run human rights commission said yesterday.

According to the commission’s investigation, managers at the nursing home locked the doors of cells from the outside, confining a total of 26 patients to rooms that had steel-barred windows. The size of each room was fit for only one small person - 1.5 meters (4.9 feet) in height, 1.7 meters in length and 1 meter in width. Patients told the commission that they couldn’t do anything but crouch on the floor and were allowed to exit the rooms only when they were fed.

In order to “educate” the patients, managers hit their palms and soles with brooms, the commission said. The director also excluded fresh fruits and vegetables from the patients’ diets.

The government-funded nursing home has been running for nearly 10 years.

“Director Lee came here when the nursing home was founded in 2002,” a former manager of the nursing home told the JoongAng Ilbo yesterday. The manager left the establishment in 2011. “We once tried to bring a sick child to a local hospital, but Lee banned it, saying he wasn’t going to spend the funding provided by the government.

Due to a lack of essential nutrients, children at the nursing home showed symptoms of anemia and malnutrition.

Lee hired most of the managers as contract workers and if employees raised objections to his actions, Lee threatened to fire them.

The current managers couldn’t bear the acts and so brought the inhumane treatment to the attention of a local district office, leading to the commission’s inspection.

“Lee used to say we don’t have a sufficient budget because the disabilities of our patients aren’t serious enough [to warrant additional funding],” the former manager said. “I don’t understand why children are starving despite the hundreds of thousands in government funds.”