A high school student allegedly choked a childhood friend to death over a mere 100,000 won ($88) and then sat down to play a video game for ten hours straight.

Guro Police stated on Tuesday that an 18-year-old boy surnamed Kim was detained for the murder of his friend, also 18 and also surnamed Kim. The suspect strangled the victim with a plastic cord around 1:30 a.m. on Jan. 27 in an isolated public bathroom in front of a park in Guro-dong, southwestern Seoul, according to the police. 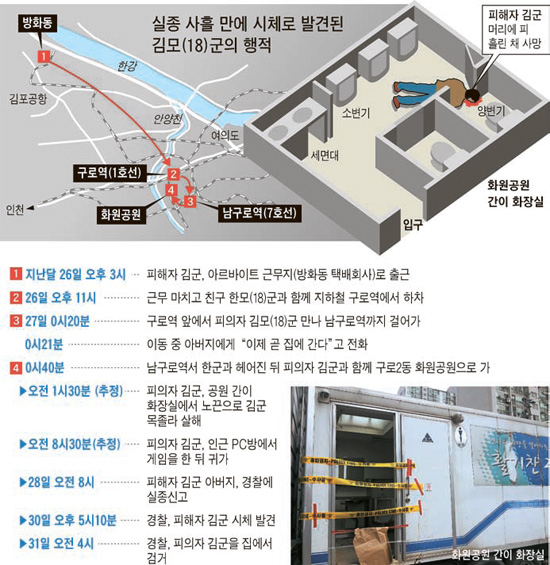 Both boys lived in the same neighborhood and attended the same elementary and middle schools.

In his testimony to the police, the murder suspect, described by his homeroom teacher as being a “quiet boy far from being associated from violence,” stated, “After I strangled him and rummaged through his wallet, [the victim] wriggled so I thought he wasn’t dead” and that “whether he died or not, I thought the police would come for me.”

The murder suspect, having finished his part-time delivery job late on the night of Jan. 26, called up and met the victim at Guro Station at 12:20 a.m. on Jan. 27.

The previous day, the victim had called the suspect and demanded he return 100,000 won that the suspect borrowed six months ago, the police revealed. After they met, the two boys continued to fight over the issue as they left the subway station and walked toward the direction of Namguro Station.

The victim entered a public bathroom in the nearby park to relieve himself and told his friend, “If you continue not paying back the money, I am going to tell everything to your mother and get it back,” then turned around to go into the stall.

At that moment, the suspect reached into his jacket pocket and drew out a plastic cord which he used to strangle the victim. The cord that the suspect kept in his pocket was used at a restaurant where he worked part-time to secure sign posts. The victim collapsed onto the floor of the bathroom.

The suspect went through the victim’s pockets and took 100,000 won from his wallet, along with his phone. Then, he headed straight to a PC room near Guro Station that he often frequents and played an online football game all night.

The suspect split the five days between the incident and his arrest in the PC room and another friend’s home, spending the money taken from the victim.