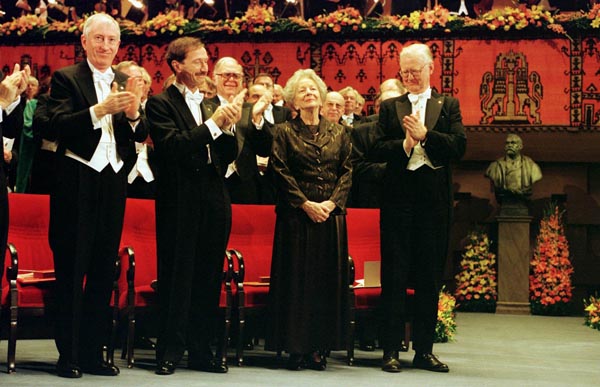 WARSAW, Poland - Poland’s 1996 Nobel Prize-winning poet Wislawa Szymborska, whose simple words and playful verse plucked threads of irony and empathy out of life, has died. She was 88.

Szymborska, a heavy smoker, died in her sleep of lung cancer Wednesday evening at her home in the southern city of Krakow, her personal secretary Michal Rusinek said.

She died surrounded by relatives and friends, said Katarzyna Kolenda-Zaleska, a journalist and a friend of the poet.

The Nobel award committee’s citation called her the “Mozart of poetry,” a woman who mixed the elegance of language with “the fury of Beethoven” and tackled serious subjects with humor. While she was arguably the most popular poet in Poland, most of the world had not heard of the shy, soft-spoken Szymborska before she won the Nobel prize.

She has been called both deeply political and playful, a poet who used humor in unforeseen ways. Her verse, seemingly simple, was subtle, deep and often hauntingly beautiful. She used simple objects and detailed observation to reflect on larger truths, often using everyday images - an onion, a cat wandering in an empty apartment, an old fan in a museum - to reflect on grand topics such as love, death and passing time.

Foreign Minister Radek Sikorski said on Twitter that her death was an “irreparable loss to Poland’s culture.”

Last year, President Bronislaw Komorowski honored Szymborska with Poland’s highest distinction, The Order of the White Eagle, in recognition of her contribution to her country’s culture.

In reaction to her death, Komorowski wrote that “for decades she infused Poles with optimism and with trust in the power of beauty and the might of the word.”

Szymborska was our “guardian spirit,” Komorowski wrote. “In her poems we could find brilliant advice which made the world easier to understand.”

Rusinek said on TVN24 that as long as her condition allowed, Szymborska was working on new poems, but she had not had time to arrange them in order for a new book, which she had intended. The book will be published this year, he said.

The Nobel Prize brought a “revolution” into the life of the modest poet and she had to struggle to protect her privacy, Rusinek said, but the prize also was a “great joy, a great honor which brought new friendships and changes for the better.”

Despite six decades of writing, Szymborska had less than 400 poems published.

Asked why, she once said: “There is a trash bin in my room. A poem written in the evening is read again in the morning. It does not always survive.”

Culture Minister Bogdan Zdrojewski said in a statement that Szymborska was candid, authentic and hostile to any form of celebrity.

“She had understanding for others, she understood the weaknesses of others and had huge tolerance for them,” the statement said. “On the other hand, she expected to have a modest place for herself.” AP