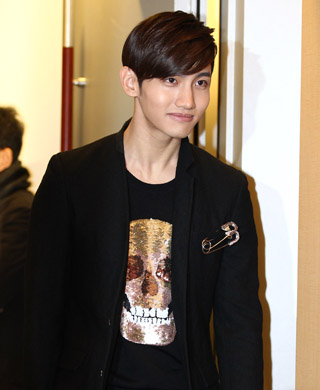 Chang-min from boy band TVXQ is set to make his Japanese film debut in the movie “Run with the Gold.” SM Entertainment confirmed yesterday that the singer has been cast to play the character Momo, a North Korean spy who poses as an exchange student in Japan.

The movie is based on a book by Japanese author Kaoru Takamura and is about six men and their race for gold in Osaka.

The mystery-suspense film will be directed by Kazuyuki Izutsu and feature Japanese stars Satoshi Tsumabushi, Tadanobu Asano and Toshiyuki Nishida.

Meanwhile, Chang-min kicked off TVXQ’s Japanese tour on Jan. 18 at the Yokohama Arena. The tour will continue until March with 24 concerts in 11 cities including Nagoya, Fukuoka, Nigata, Sapporo, Hiroshima, Fukui and Osaka.

The tour, called “Live Tour 2012: Tone,” originally consisted of 20 concerts, but four more concerts - two at the Tokyo Dome and two at the Osaka Kyocera Dome - were added due to high demand.